The History of Tennis – From its Origins to the Present

Tennis is one of the most popular sports in the world today. More than 1 billion players and fans play tennis and regularly cheer for tennis matches. But how did tennis develop from a marginal sport to such a popular popular sport? Learn about the history of tennis, from its origins to the present day. 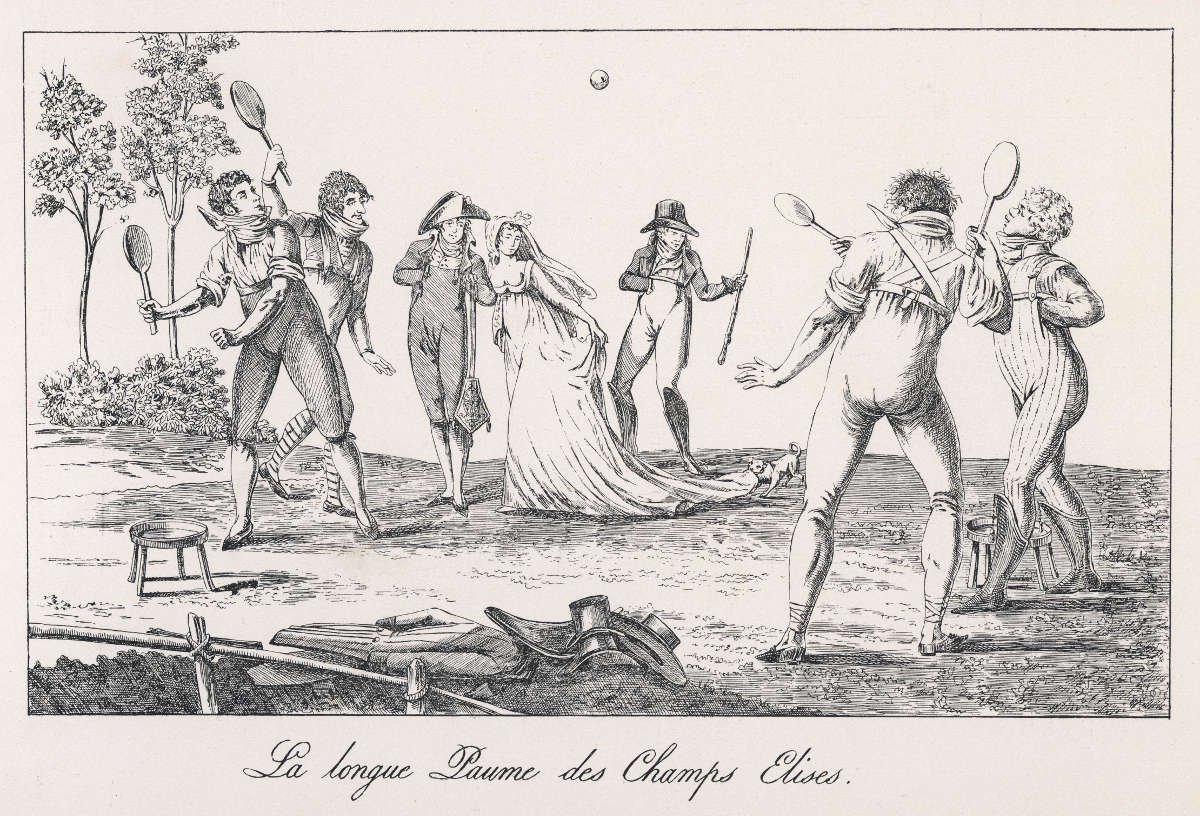 The origin of the game of tennis can be found in French monasteries in the 13th century. During this time monks developed a game which they could play in the courtyards of their monastery. This gave rise to the so-called “jeu de paume”, the predecessor of today’s tennis game.

Translated from the French, the expression means “palm game”. The object of the game was a ball made of leather or cork, which had to be hit with the palm of the hand over a net into the opponent’s court. As in tennis, the objective was to prevent the opponent from reaching the ball or to force him to hit it into the net.

Another special feature of the jeu de paume were the walls of the monastery, which were included in the game. Similar to squash, the ball was allowed to be hit against these walls. Especially at serve, the ball was first hit against one of the sloping roofs of the courtyard and then bounced in the opponent’s court.

In the 14th century, the jeu de paume enjoyed ever-increasing popularity. From then on, not only monks but also the general population played the well-known ball game. Moreover, Jeu de paume also aroused international interest and spread mainly to England.

In order to meet the high demand for playground equipment, a large number of new ball houses were built. One of the main advantages of the ball houses was the flat floor, which made the ball bounce better. On the other hand, the players were protected from rain and other weather conditions. 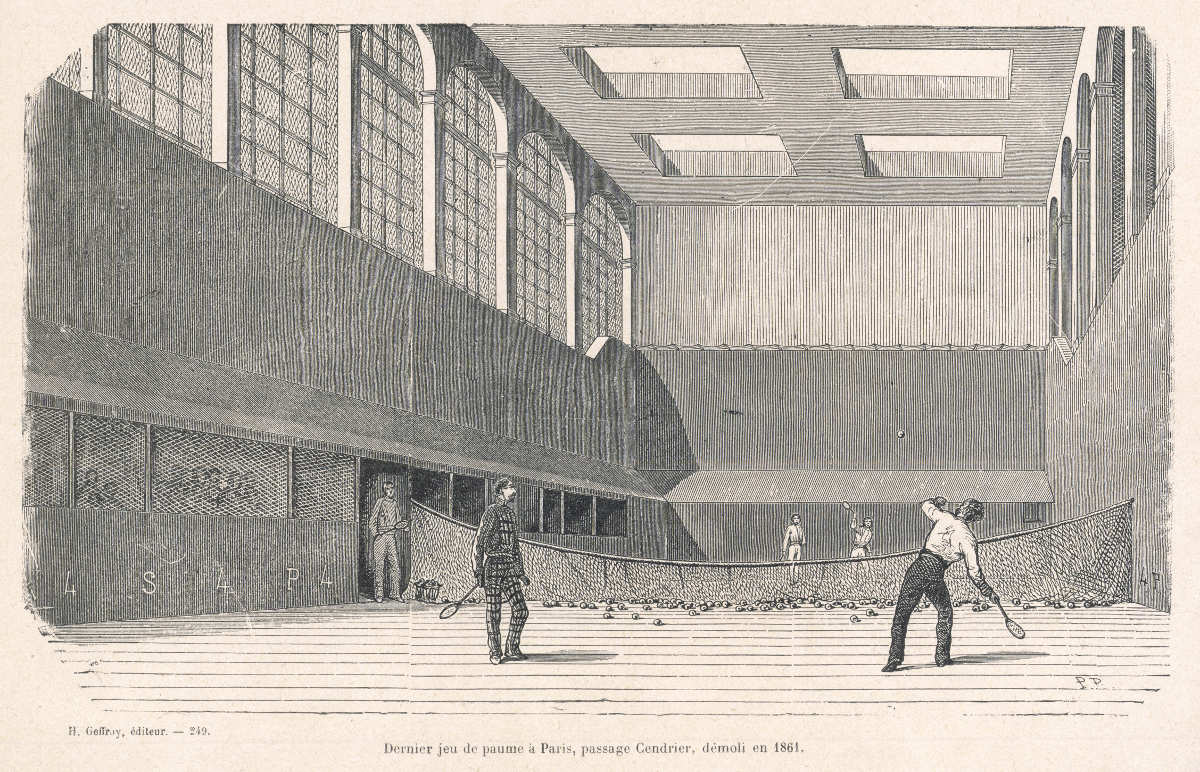 Furthermore, the term “tennis” appeared for the first time during this period. It is likely that the name comes from the French word “Tenez!” (“Hold”). According to this, the player announced his serve to his opponent with the expression”I’m holding the ball!”

A short time later the first tennis clubs were founded. In addition, further new commercial tennis facilities were built. Here every player could rent a court and the necessary playing equipment. In general, tennis became a popular leisure activity. In 1464 the first tennis tournament was held in Bruges, Belgium.

Towards the end of the 15th century, players no longer used their hand to hit the ball. Instead, new accessories were introduced to make the game easier. The first tennis racket was developed. This racket was made of solid wood and had a racket face covered with parchment.

At the beginning of the 16th century, the parchment stringing of the tennis racket was replaced by a gut strings. New products were also created, such as the first tennis shoes. France was regarded as the centre for the production of tennis equipment.

Gradually tennis developed into a popular sport in France and England. In this phase the ball sport was at its peak. Among the aristocracy tennis gained more and more prestige.

Even some kings became increasingly interested in the game and had magnificent facilities built. Among others, the King of England, Henry VIII, was an enthusiastic tennis player and therefore owned several tennis courts.

In the following century, however, the tide turned for the worse. The sport that had been so popular before was about to lose its importance. One reason for this was the increased occurrence of gambling and betting fraud during tennis matches. 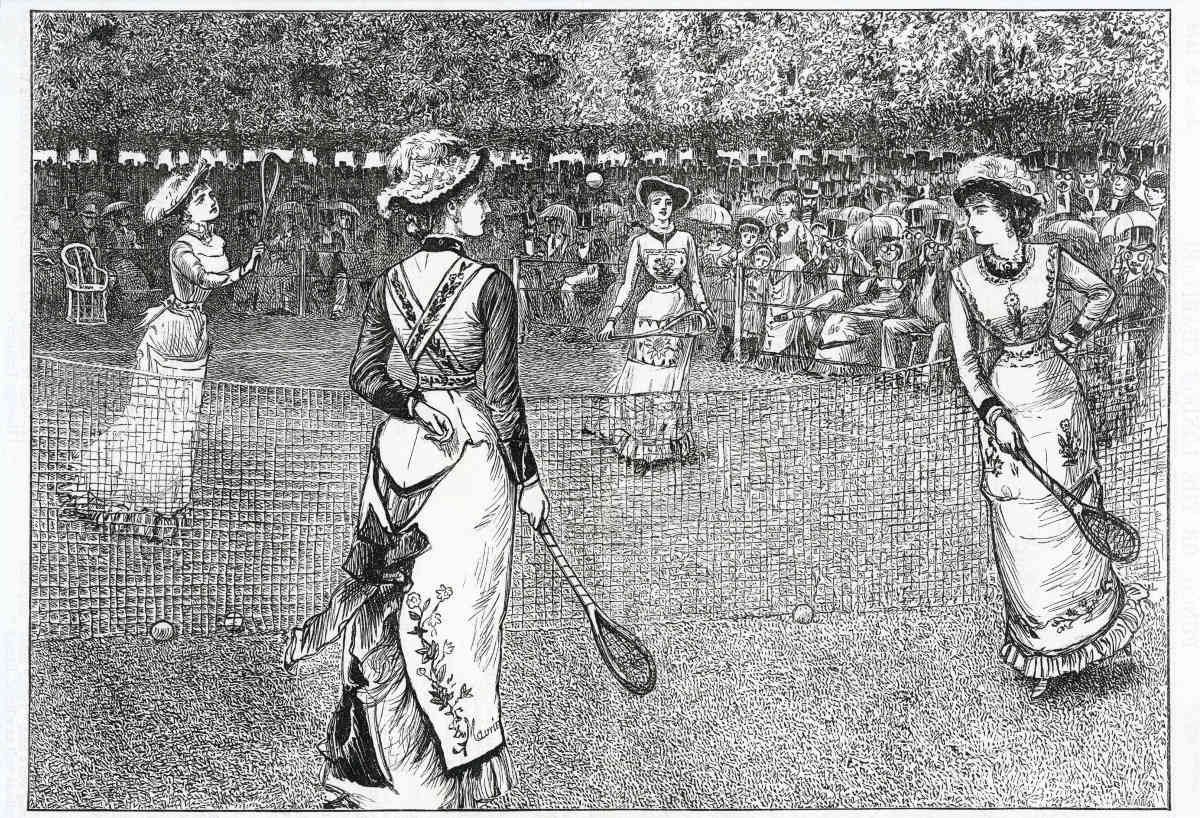 Another problem was the flirting between women and men next to the court, which was unwelcome to many spectators. In general, the interest in ball sports decreased significantly.

Another event that aggravated the situation was the outbreak of the English Civil War in 1642, which even led to the banning of tennis in England.

The 18th century was also marked by many unrest. Overall, the number of ball houses collapsed sharply. Due to the declining popularity of tennis, the operation of a tennis facility was no longer profitable. As a result, the majority of the ball houses were converted into theatres. Some of the tennis facilities were even completely closed down.

In addition, the beginning of the French Revolution around 1789 was a further factor. Basically, tennis has fallen into disrepute during this epoch. As in England, the situation in France escalated. The consequence were playing bans to the same extent.

After a long period of unrest, the situation relaxed again. In the middle of the 19th century, a major innovation brought tennis its second boom.

We are talking about the chemist Charles Goodyear, who used vulcanisation to make a tennis ball from elastic rubber. This ball had considerably better bounce characteristics than the old leather balls. The new tennis ball was first used in the 1850s.

About two decades later, in 1874, the English inventor Walter Clopton Wingfield had the “lawn tennis” patented. In addition to a playing field, he also laid down uniform tennis rules. These standards were to simplify the game.

This resulted in the first prototype of lawn tennis, which has many similarities with today’s tennis. In retrospect, Wingfield’s invention helped tennis to its final breakthrough.

Shortly afterwards, the All England Lawn Tennis and Croquet Club held the first grass tennis tournament in 1877. The venue was the capital of England, London. More precisely, the games were played in the Wimbledon district. This traditional tournament is today considered one of the most important and well-known tennis tournaments worldwide.

Later on, lawn tennis was included as an Olympic sport. For the first time, players from all over the world could compete against each other at the 1986 Summer Olympics in Athens.

In 1913 the “International Tennis Federation” (ITF) was founded as the global organization for the tennis game. Meanwhile the ITF consists of more than 200 individual tennis federations.

After participation in further Olympic Games, tennis was removed from the Olympic programme in 1928. The background was a dispute between the ITF and the Olympic Committee. In 1988, however, tennis was again recognised as an Olympic discipline.

Another important date was 1968, which marked the beginning of a new era in tennis, the so-called “Open Era”. Before this time, admission to official tennis tournaments was reserved exclusively for amateurs.

With the Open Era, professional players now also had the opportunity to participate in the same tournaments. In particular, the Open Era paved the way for the commercialisation of the sport.

Overall, tennis is subject to constant change. Also in the past years there have been various innovations in different areas. From special game variations to new tournaments.

If you compare today’s tennis with earlier matches, you will notice that the game has become much faster. Professional players are becoming more and more athletic and new product innovations are coming onto the market. Technology just doesn’t stand still.

We are curious to see what history the sport will write in the coming years.