How to Hit a Solid Backhand

The backhand is the counterpart of the forehand and is one of the most important basic strokes in the game. To win tennis matches, a strong backhand is essential.

Compared to the forehand it is a bit more difficult to play. Because the backhand is much more complex, good coordination is required. In the following we will explain to you what makes a technically clean backhand. With a little bit of practice basic strokes will be no problem for you.

Basically there are two ways to hit a backhand in tennis. You can make this shot with one hand or both hands. Each variation has its pros and cons, whereas the majority of tennis players prefer the two-handed backhand.

The formerly widespread one-handed backhand is now seen less frequently. All in all, the tennis game has become faster and faster lately, which therefore requires more powerful shots. Therefore you need enough stability, which is rather less available with the one-handed backhand. Accordingly, you have to make some sacrifices in terms of the ball speed.

On the other hand, this backhand can help you to place the shots better on the court. Because you only hold the racket with a single hand, you are more flexible in your movements. The big advantage is therefore the particularly wide reach.

The backhand with both hands is the much more popular variation. Especially for beginners the two-handed backhand is easier to learn. Compared to the one-handed backhand it gives you more stability, especially with the second hand.

So you have a better starting position for powerful strokes. Furthermore, you can control a ball hit late in the game relatively well. However, keep in mind that the reach suffers a little because both arms are in use with this backhand.

The ideal backhand grip is the “Continental grip” for both the single and the double-handed style.

For the one-handed backhand you only need your dominant hand. With this hand you hold the handle in such a way that the Palm of your hand is flush with the butt cap. This is where the leverage is greatest when hitting the ball. 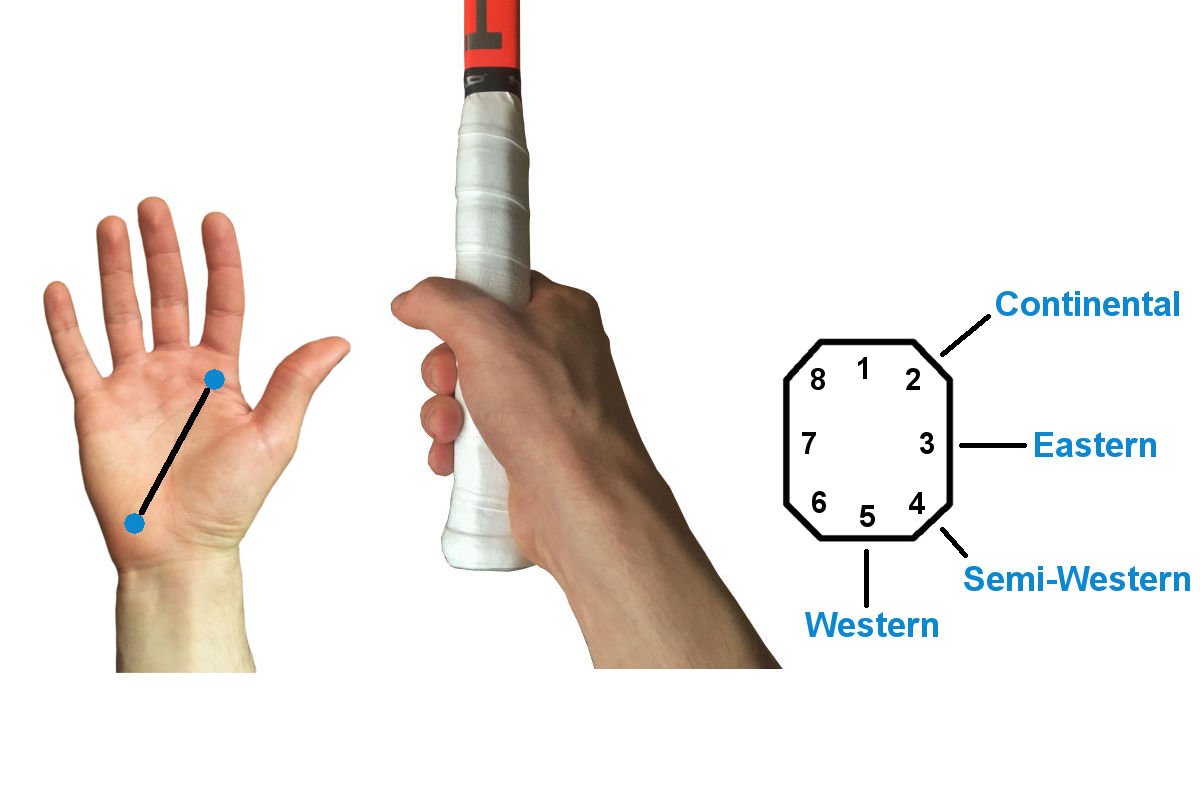 As you can see in the graphic, you have to place the knuckle of your index finger and the Palm of your hand on bevel number 2. If you are left-handed, the graphic is mirror-inverted for you. Instead of number 2, number 8 is relevant for you.

With the two-handed backhand the other hand is now added to this. So as a right-handed player, you use your left hand. Align it according to bevel number 7. Together the hands should form a unit. This is the stable position we need for the backhand.

As with the forehand you are standing in the ready position before the shot. You have an open stance and look towards your opponent. Whether you want to play one-handed or two-handed backhanded, you always hold the tennis racket in your right hand. The left hand is on the throat of the racket.

You shouldn’t forget the split step either. This jump is extremely important to get ready for the shot. It also helps you to get to the ball faster.

As soon as the ball Comes over the net towards you, you start the backswing. At this moment, turn your upper body to the left Also pull your arms in this direction. Your arms should be slightly angled here.

If you play the backhand one-handed, your left hand stays on the throat of your racket during the whole backswing. The difficulty with this backhand is that you have to move the racket very far back. The racket face must be positioned parallel to the baseline.

Before you swing the racket with the two-handed backhand, you first have to take the appropriate grip. You simply reach with your left hand to the specific place on the handle. Now you take out the racket backwards. You have reached the perfect point when the racket face is parallel to the sideline. In general, make sure that the swing is slightly curved.

Basically, you stand to the side of the net in both variations. Your right shoulder should be facing the opponent. In Addition, you place your right foot half a step forward. Onto this foot your transfer your body weight. Your toes should point diagonally forward, in the best case towards the left net post. Bend your knees a little to prepare for optimal energy Transfer.

The right time to follow through is when the ball is in the air at hip level. In general, the aim is to hit the ball slightly in front of the Body. This is where you can transfer the most energy to the ball.

Let us consider the swing path of a one-handed person. First, lower the racket a little. At this moment, your left hand leaves the throat of the racket. Now accelerate the racket with your right arm in a slight upward motion. Align the racket face parallel to the net.

Pull the tip of the racket upwards just before the contact with the tennis ball to create topspin. At the same time, extend your left arm backwards in the opposite direction. This will help you keep your balance better.

In the case of the two-handed backhand, keep both hands on the grip until the end of the shot. In contrast to the one-handed backhand you swing the racket with bent arms. When you follow through you move your upper body and both arms evenly to the right and over your shoulder. There you finish the backhand.

It is important for both strokes that the follow through is done in a fluid movement. Use the rotation of your upper body towards the forehand side. In addition, we advise you to stretch your body forward before contact with the ball. In this way, you can hit the ball with more momentum.

With a stable forehand and backhand the next step is to deal with the return. Click on the button to learn more.