The set of rules is quite extensive in tennis. It forms the basic structure on which every tennis match is built. The rules mainly ensure that all possible situations and scenarios on the court are clarified. So the players know how to behave at that particular moment.

Unfortunately, most tennis rules are relatively complicated in their expression, which makes them difficult to understand. Often there are also many technical terms, whose meaning is not known at first sight. As a beginner it is not easy to find your way through this jungle of rules.

We know exactly how tedious it is. When we started playing tennis, we had to learn all the rules ourselves. Therefore, we sat down together and created a simple overview of all rules that are really important for the basic understanding. This saves you hours of reading pages of text and gives you more time to play tennis in practice.

In general, tennis is a game played by more than one player. There are two different possibilities regarding the number of players.

The best known variation of the game is the singles. In this match one player competes against another. Besides the singles there is the doubles. In this case there are four players on the court, who play against each other in teams of two.

2. Object of the Game

In general, the goal of the game is to defeat the opponent by winning more sets. To determine a clear winner, the maximum number of sets played is therefore odd.

In tennis, the most commonly used game mode is the “best-of-three” format. In this mode, the player who first wins two sets wins the complete match. For example, the match can end 2-0 in sets for one player. In case of a tie (1-1), one deciding set is played. In this case the maximum distance is three sets.

The “best-of-five” mode is only used in the men’s singles at Grand Slam tournaments. These matches are often much longer, as the winner needs three winning sets. This means that up to five sets can then be played.

Before the match starts, you first have to determine which player will start serving in the first game. In most cases this is done by coin toss.

But you can also turn your racket on the ground and see if the logo on the butt cap is facing up or down. The winner of the draw can then choose between two criteria.

He or she can decide whether to serve first or return. Instead, he or she can also choose the side of the court on which he plays in the first service game. The opponent player then makes the decision on the unselected criterion.

After it has been clarified who serves first, both players are given five minutes to warm up and prepare for the match. 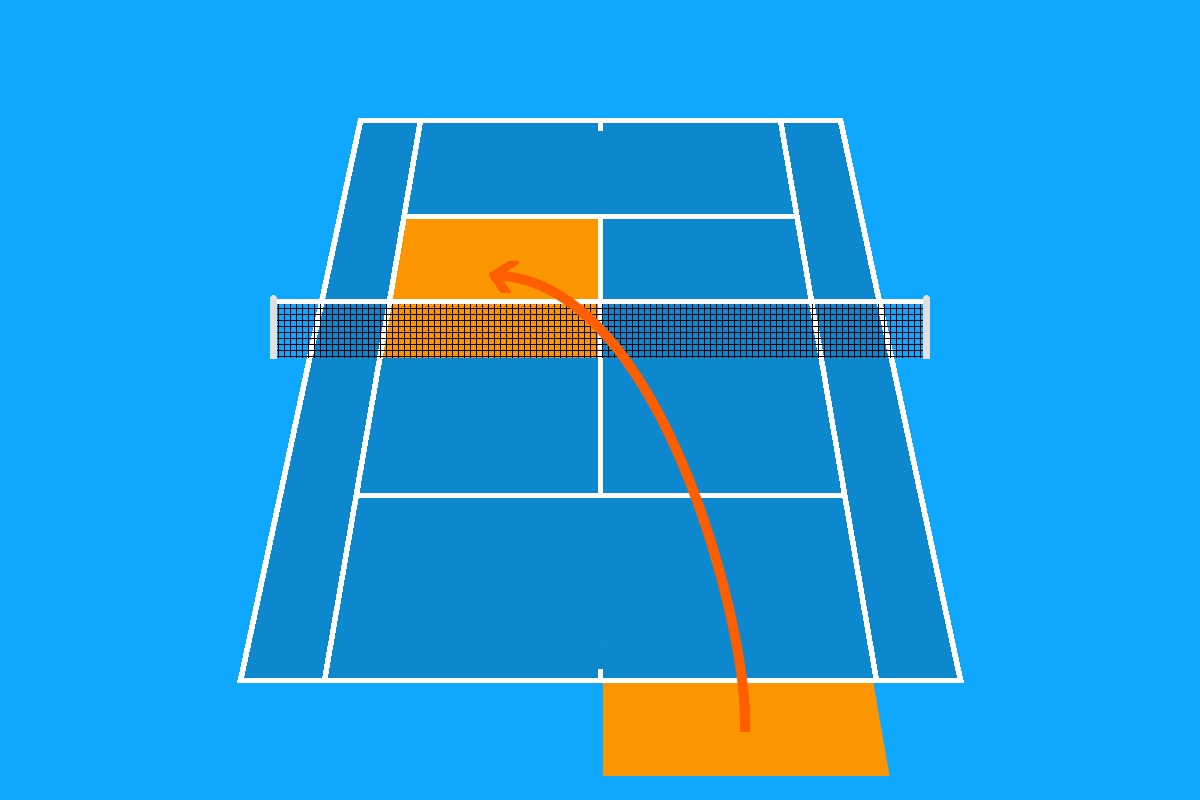 Basically, the game starts with a rally. Every rally starts with a serve. The first serve is always from the right side. You are standing in the yellow marked area in front of the baseline. This field is bordered by the mentally extended center mark and the sideline.

Now you swing the racket and try to hit the tennis ball diagonally into your opponent’s service box. In principle, the lines also belong to the tennis court. So if the ball touches the line, your serve is valid.

If you hit the ball into the net or if it lands out of bounds, you get a second try. If this attempt also fails, your opponent has won the rally and gets one point. A mistake of this kind is called a “double fault”.

It is important that you don’t leave the yellow area during your serve. You should be particularly careful not to step on the baseline. Otherwise you will make a foot fault and your serve will be invalid.

In the following, you always serve alternately from the right and left. On the second rally, you start on the left side with your serve Now you have to hit the ball diagonally to the right into the other service box.

Then you play the point. At the third rally, you are back on the right side. The fourth rally is started from the left, etc. Basically, you play until one player has enough points to win the service game. 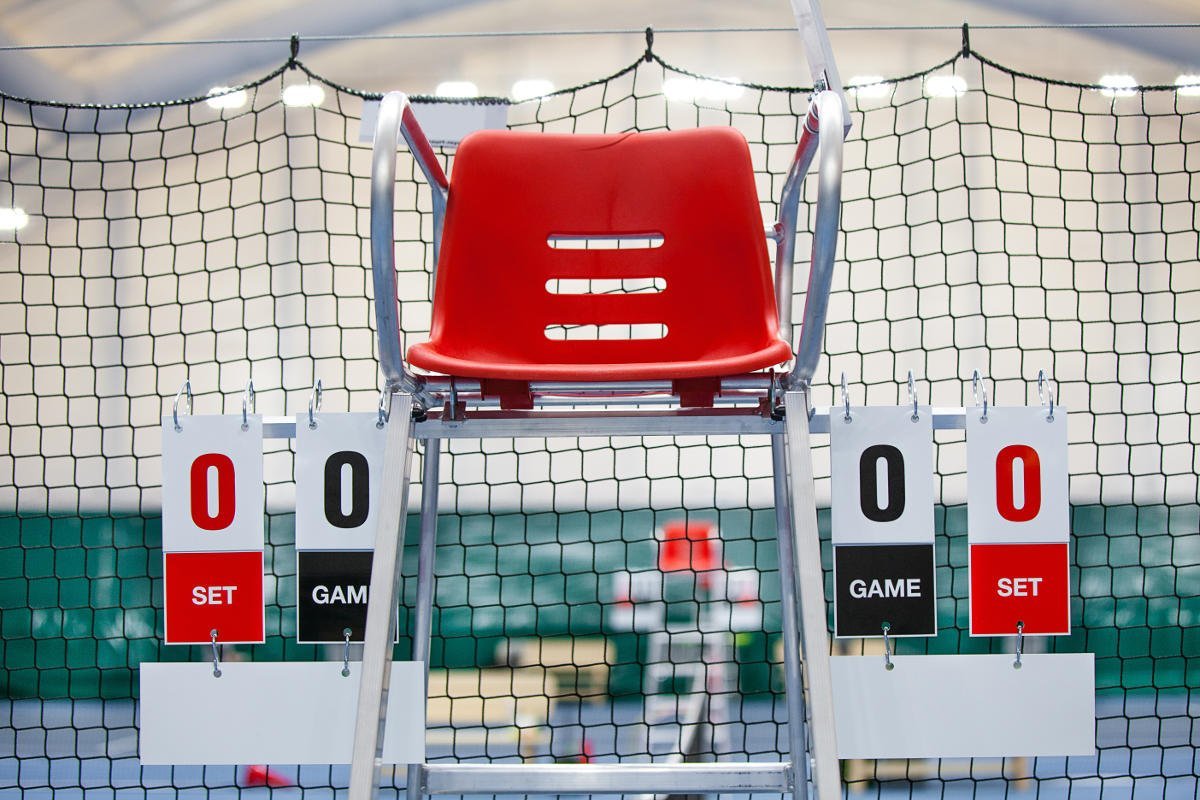 Overall, the scoring system in tennis uses three different units. As described above, the match is divided into several sets. The sets are made up of multiple consecutive service games. These service games are further subdivided into individual points.

The point represents the smallest scoring unit in tennis. It is awarded to the winner of the respective rally. After a correct serve, you and your opponent have the task of hitting the tennis ball into the valid court.

This court is delimited on both sides by the net, the two sidelines and the baseline. 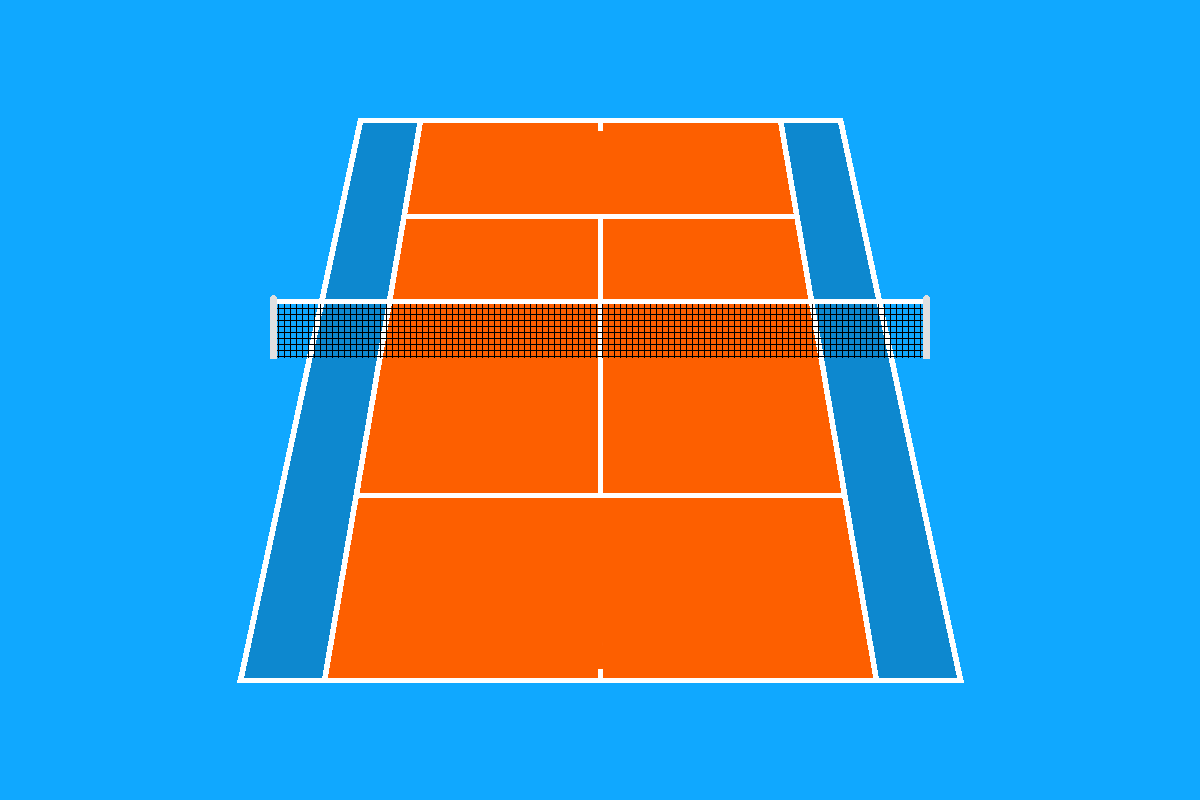 In doubles, the tennis court expands with the outer sidelines. 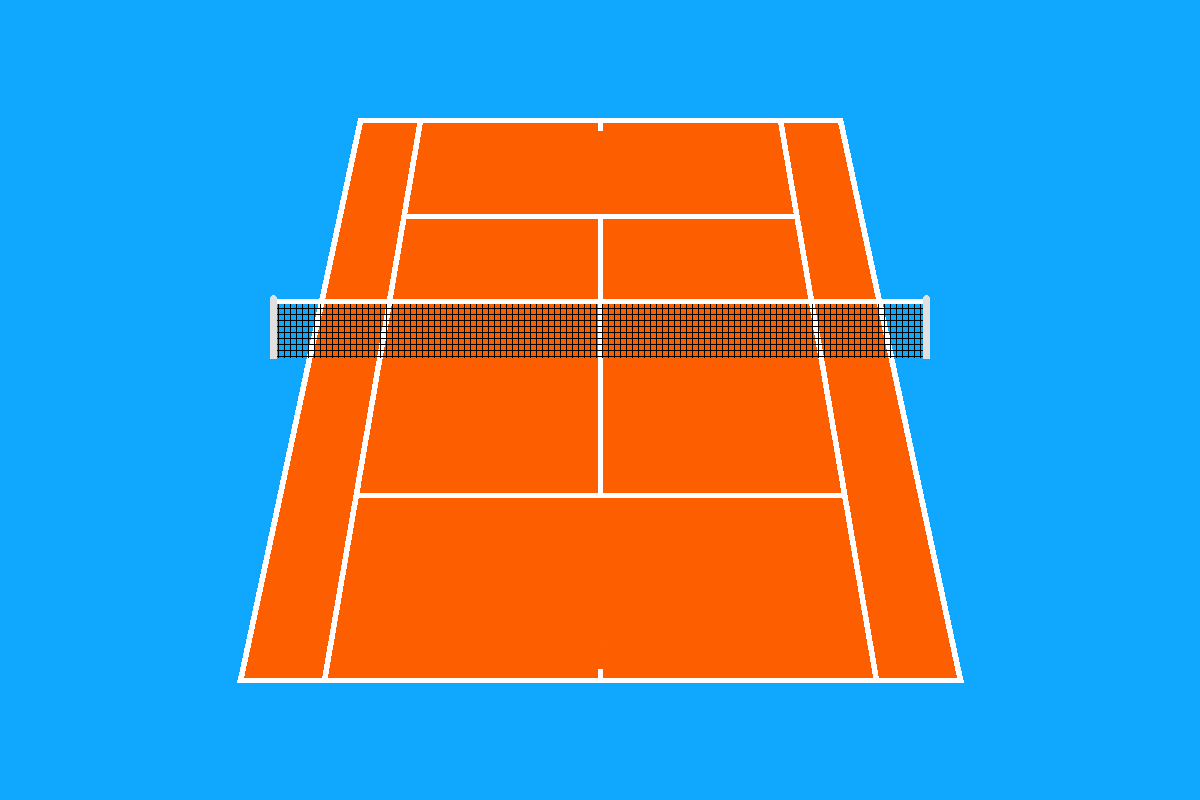 The rally continues until one of you is not able to bring the ball back into the opponent’s court. So you win a point if

Each service game consists of a series of points played. Simply said, you need four points to win a service game. But we count these points using a different system:

Note, however, that to win a service game, you must have a lead at least a two points. This special case occurs when you both have three points each and the score is 40-40. This score is called “deuce”. In this case, you need two points in a row to win the game.

If you win another point on your own serve, you have the so-called “advantage”. This means that you are only one point away from winning the game. The score is now called “ad in”.

The set is the result of several successive service games. In general you need 6 won service games to win a set. For example, if you win 6 games and your opponent only 2, the set goes 6-2 to you.

Additionally, you need to have a lead of at least 2 games over your opponent. Sometimes it is not possible to keep this lead. There are certain special rules for this.

If you and your opponent each win 5 games, the score is 5-5. In this constellation, the set can be decided if one of you wins the next 2 service games. Then the set goes 7-5 to the respactive winner.

At a score of 6-6 a so-called “tiebreak” is played. This is a special service game in which you need 7 points to win the tiebreaker and therefore the set. However, the points are not counted with 15, 30 and 40, but with the normal numbers 1, 2, 3, etc.

In principle, the player that was the returner in the game before the tiebreak starts serving now. For example, if your opponent has finished his service game at 6-6, you begin in the tiebreaker with your own serve. After the first point, the serve changes.

In this case, your opponent then has the serve on the next two points. Afterwards you get two serves, then your opponent again and so on. The serve change takes place after the first point at a distance of two points.

Furthermore, you both change sides after every 6 points played. During the change of sides there is no break. You continue playing until one of you has scored 7 points. The difference of two points is also important here. For example, a score of 7-7 would go at least to 9 points.

Once the tiebreaker has been decided, it is noted as 7-6 for the winner. The score of the loser is Always indicated in brackets. If you have won the tiebreak with 7-4 points, the result is therefore noted as 7-6 (4).

A special version of the normal tiebreak is the “match tiebreak”. The only difference to the standard variant is that you need 10 points to win the match tiebreaker instead of 7 points.

On international level it is mainly used in doubles, i.e. in the men’s, women’s and mixed doubles. In case of a tie in sets, no complete deciding set is played, but only the match tiebreak. The main reason for the introduction of this tiebreak was the significant reduction of the playing time.

In general, there are some exceptions in the 5th set of a men’s singles at Grand Slam tournaments.

At the Australian Open, at a score of 6-6, you don’t play a normal tiebreak to 7, but a match tiebreak to 10 points.

The French Open is the only one of the four tournaments not to have a tiebreaker. Instead, a lead of at least two service games is necessary.

In Wimbledon, the tiebreak takes place at the score of 12-12, but this is typically played up to 7 points.

The US Open handle the topic relatively simply. Just like in the other sets, the tiebreaker is used at 6-6 and is played up to 7 points.

With the partly new rules, one would like to limit matches to a certain time limit and in this way protect the players. Then the well-known marathon matches, such as the longest tennis match ever between John Isner and Nicolas Mahut, will no longer be possible.