What is Tennis Elbow and How is it Treated?

The tennis elbow is probably the most unpleasant thing for every tennis player. In general, the so-called “Epicondylitis humeri radialis” is an injury that causes a painful stinging in the elbow.

This often results in a lot of restrictions when playing tennis or in the worst case even in having to put the racket completely aside. But not only tennis players are affected by this injury. Overall, there are far more groups of people who are plagued by the pain.

Nevertheless, there is one piece of good news: tennis elbow is usually only temporary and disappears after a while. How to find out if you have tennis elbow and how it can be treated is explained in this article. 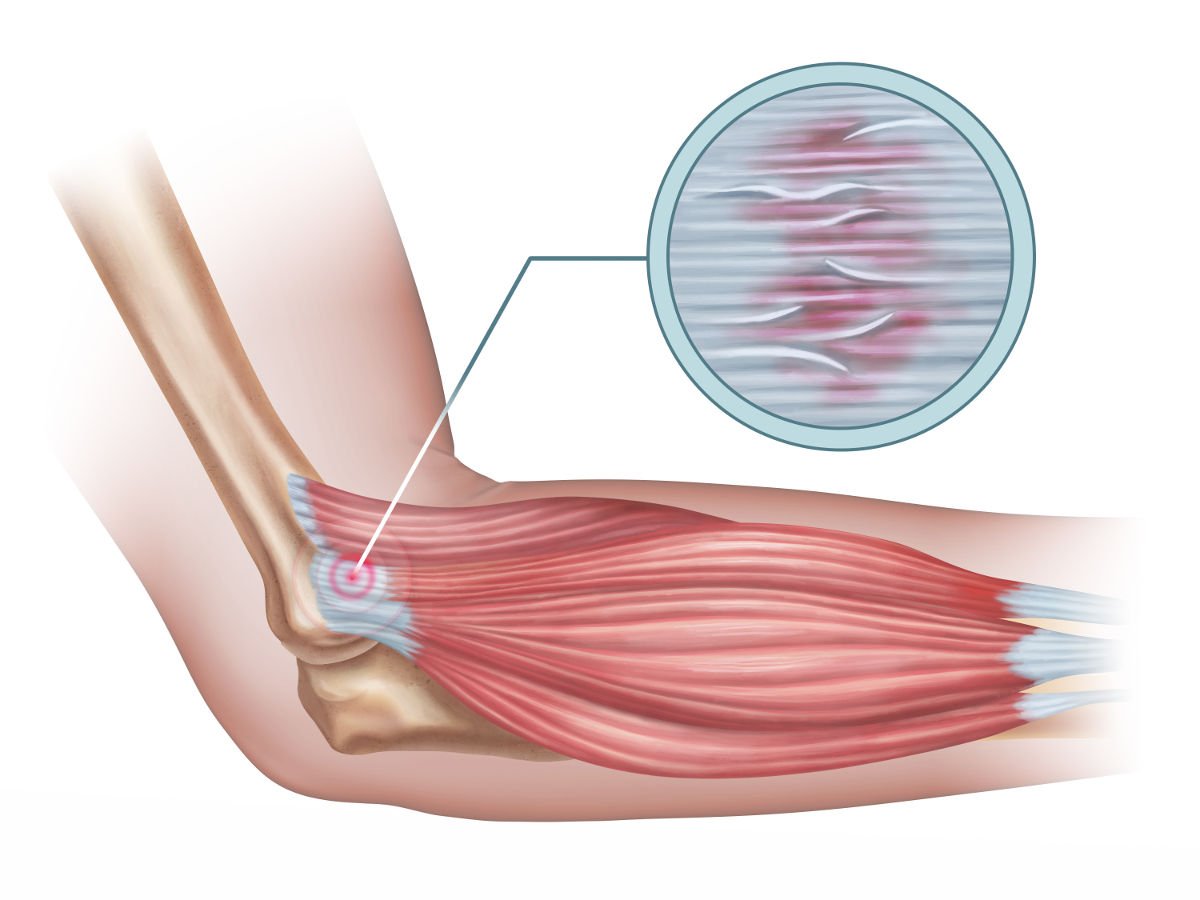 How does tennis elbow develop in the first place? For this we first look at the human forearm. Essentially, the elbow joint is responsible for bending and stretching our arm. This movement is supported by the extensor muscles on the outside of the elbow.

To connect the bone with the muscles, there is also a tendon tissue between them. When you now make a movement with your arm, the tendons in this area become tense.

If the movement is repetitive, the tendon tissue is stressed to such an extent that micro-fissures can occur. Ultimately, this irritation of the tendon attachments leads to pain in the forearm. This can even lead to radiating pain into the hand or upper arm.

The main cause of tennis elbow is therefore a permanent overloading of the musculature. Above all, the triggers can be observed in manual activities. Imagine, for example, hammering nails into the wall all day long. At some point, your arm will simply cramp up.

Often it is also office workers who suffer from tennis elbow. In this case it is also called “mouse elbow”. Other groups of people affected include street workers, waiters or musicians.

Especially with regard to tennis players, there are several causes for tennis elbow. For one thing, it can be the wrong equipment. Here you should pay particular attention to choosing the right tennis racket with the right stringing.

A racket that is too stiff or too heavy can cause your arm to cramp. Additional influencing factors are a very stiff tennis string or a high stringing hardness.

If you have arm problems, you should check whether it makes sense to switch to a racket with a flexible frame. Also take a look at natural gut or multifilament strings. They have the advantage that they are quite arm-friendly.

Furthermore, tennis elbow can also develop as a result of an incorrect hitting technique. As a consequence, the incorrect posture leads to a greater strain on the muscles. The one-handed backhand is by far the stroke with the greatest stress. It is noticeable that arm problems mainly occur with recreational players.

Apart from tennis, there are numerous other racket sports that have the same movement sequences. These include padel, squash or badminton. In golf this injury is called the “golfer’s elbow”.

In general, tennis elbow occurs more frequently in people between the ages of 35 and 50. The reason for this is that at this age the first signs of wear of the tendon become noticeable. More precisely, the tendon shortens and becomes less elastic.

Tennis elbow is characterized by certain symptoms that occur in almost all affected persons. Here it depends on whether the injury is in its initial phase or has already existed for some time.

The classic symptom is the pressure pain on the outside of the elbows. If you touch your arm in this area, you feel above all that the muscle is relatively tense.

Another characteristic of tennis elbow is arm pain, which occurs during movements of any kind. In tennis, for example, it is the swing movements of the groundstrokes. At first you will feel a slight prick in your arm, later this feeling will become more intense.

As briefly mentioned above, the pain does not necessarily have to be in one place, but can extend into the upper arm or fingers. This results in a significant loss of strength in the wrist.

In addition, you can no longer extend your fingers without pain. This restricts your everyday life considerably, as even carrying a bag or reaching for an object becomes a challenge for you. Over time, your body will change to a protective position of the arm.

The pain, which was initially only temporary, can later develop into chronic pain. From this moment on, the pain continues even when the arm is at rest, which can also lead to sleep disorders. 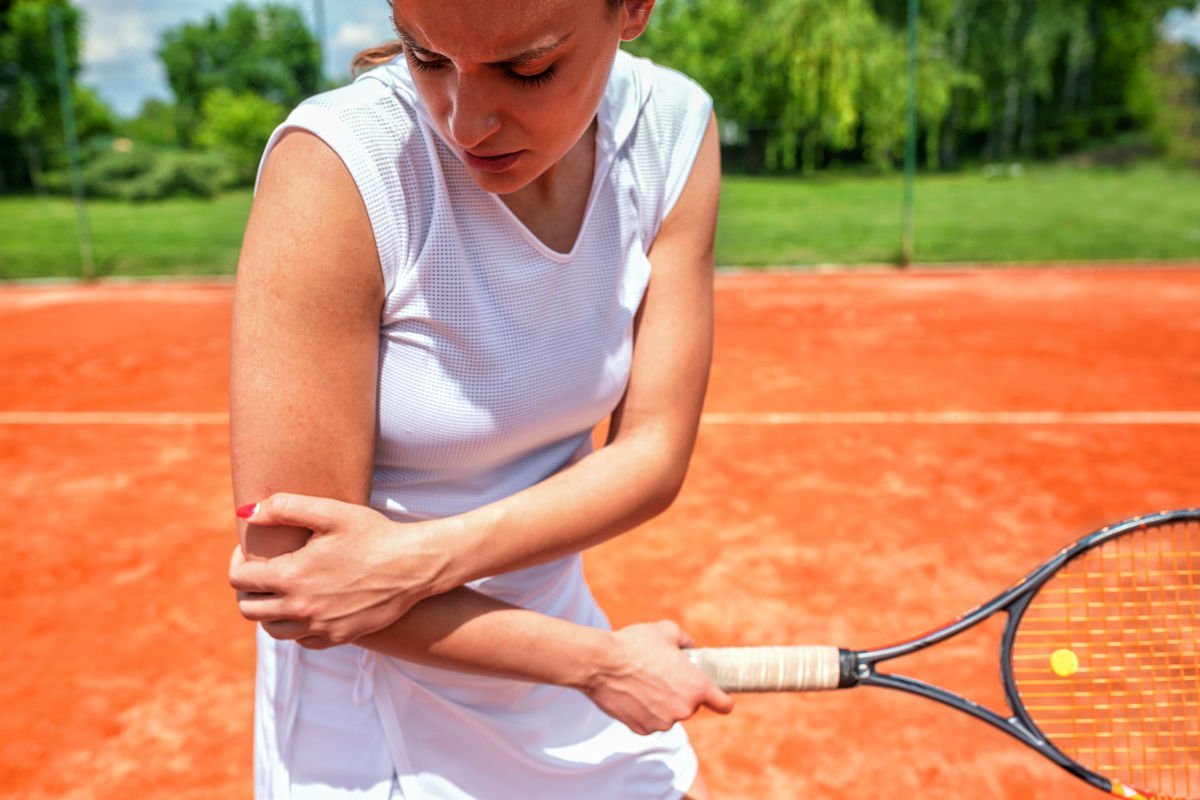 You are probably asking yourself how you can treat tennis elbow to relieve the pain. Which therapy really helps varies from case to case.

Therefore, you should first have yourself examined by a doctor. He will make the diagnosis and see which therapy suits you best. Basically, there are a variety of treatment methods. The following therapies are the best known.

Very common is the treatment with a brace. Alternatively, straps can also be used. Usually a brace is worn over the elbow joint. Its main function is to relieve the extensor muscles and the tendon attachments of your arm.

Basically, with every movement of your arm there are tensile forces on the muscles and tendons. To reduce these forces, the support simultaneously exerts a counter-tension on the muscles.

Furthermore, it stabilizes your arm during the movement. In this way, the brace releases the tension in your forearm, thus promoting the healing process.

The second treatment method is based on the use of tapes that follow a similar principle. Kinesiology tapes are elastic stiffeners that you stick to the appropriate place on the forearm. A physiotherapist is the best person to help you apply them.

Just like braces, KT tapes also relieve and stabilize your arm without restricting its mobility. So you can use your arm normally in everyday life.

Another form of physical therapy for tennis elbow is massage. Here the affected muscles are loosened by transverse massages. This method is often combined with ultrasound or shock wave therapy.

The procedure stimulates the blood circulation and metabolism of the muscles, which is intended to relieve the pain.

This manual treatment method is all about the stretching of the muscles. This is because the main problem with tennis elbow is the shortened musculature on which a strong traction force acts.

If you do not feel excessive pain when stretching, this is a suitable method to lengthen the muscles and thus reduce the tension.

Ointments or creams are very popular when it comes to therapy for tennis elbow. They mainly contain pain-relieving agents such as diclofenac or cortisone. Usually you apply this ointment with the help of an bandage at the appropriate place.

Another possibility would be to take these medications by tablet or inject them directly into the joint. In the case of injections, narcotics such as Botox can even be used.

In general, most people succeed in treating tennis elbow conservatively. However, if the above methods all fail, the last option is surgery. In this case two different procedures are possible.

On the one hand, an incision can be made in the tendon. This relieves the tendon and the irritation subsides. On the other hand, the pain-conducting nerve tracts can also be severed to finally stop the pain.

Let us now move from theory to practice. Here are a few exercises that you can do something about your tennis elbow. Before you start any stretching exercises, it is important that you get a doctor’s opinion. He can determine whether and which exercises are suitable for you.

The following exercises are part of the eccentric training. This means that you stretch the muscles as you move.

Treatment of tennis elbow often requires a lot of patience. The question of how long the healing process of tennis elbow takes cannot be answered in general. This is individual for each person affected.

It is a fact that tennis elbow disappears in some people after a few weeks, while in others it can last for several months. In the majority of cases, the arm is recovered after one year at the latest.

All in all, you should mainly try to avoid overloading your arm to prevent tennis elbow. In summary, here are all the tips for tennis players. If you follow these points, you will considerably reduce the risk of tennis elbow: