Since tennis is essentially known as an individual sport, doubles are often of secondary importance. If, on the other hand, you prefer team sports, doubles is the best choice.

At first glance, most people think that singles is hardly different from doubles. But that is not the case. On the one hand, we see this with professional players who are very successful in singles but only have moderate success in doubles.

In tennis, doubles requires special tactical knowledge, because the game is very different in its structure. In this article we explain what makes doubles so special and how you can use tactics to your advantage.

Apart from the number of players, there are various of differences that doubles have compared to singles. The first point is that playing doubles is not as run-intensive as playing singles. Although the field of play has been enlarged by the two doubles alleys, there are now two of you on the court and you only have to cover one side of the court. This saves you a lot of energy that you can invest in your strokes.

While the tennis game in singles is dominated from the baseline, the focus in doubles is mainly on the net game. In this area, the rallies are very dynamic. Since often all four players are at net, several volleys follow each other quickly. Therefore, as a doubles player, you should have a good responsiveness.

Another difference between singles and doubles is that the rallies in doubles matches are on average much shorter. This aspect is again traced to the net game, as the point is usually scored by volley or smash. 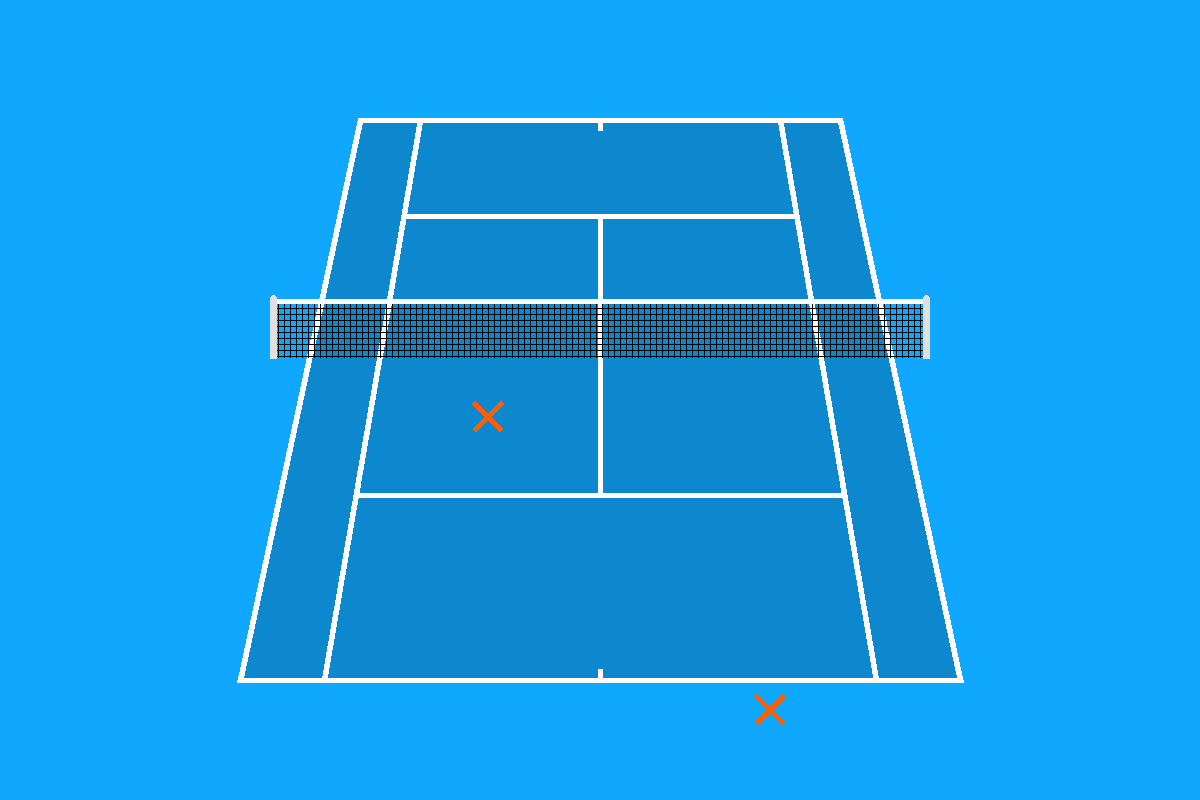 Just as in the individual game, the coin toss decides which team serves first. Let’s say you win the draw. You’re deciding which one of you will serve in the first game. In your second game, the other player serves.

You have to keep this order until the end of the respective set. At the beginning of the new set, you can change the order again. Theoretically it could happen that one of you serves twice in a row across the sets. Apart from this special feature, the usual tennis rules apply in doubles.

In general, your position as a server in doubles is not near the center mark of the baseline, but more outwardly. This is because you don’t have to cover the whole court at that moment, but only your own half.

In addition, the court is wider than in singles, so you have to take the alley into account. The main advantage of this position is that you have a better angle when serving out wide.

If you are the server, your partner should stand on the other half at net. This is the best known position in doubles. He should be approximately in the middle of the service box. He can change the exact position depending on the situation.

On your first serve he can move a little closer to the net. This is because you will probably hit a fast, risky serve, which means that your opponent will not be able to return the ball in a controlled manner. Your teammate will have the chance to volley the short return.

If you only have the second serve left, your partner will take a more defensive position. Accordingly, he takes a step back. Your partner can also adjust his position according to the variation of the serve. On a slice serve, he moves further outwards and on a serve down the middle, he moves more inwards.

It is important that you briefly discuss the variation before each serve to avoid misunderstandings. As the server, you should respond to the wishes of your opponent, because he usually finishes the rally. In practice, the server always prepares the point for the net player. 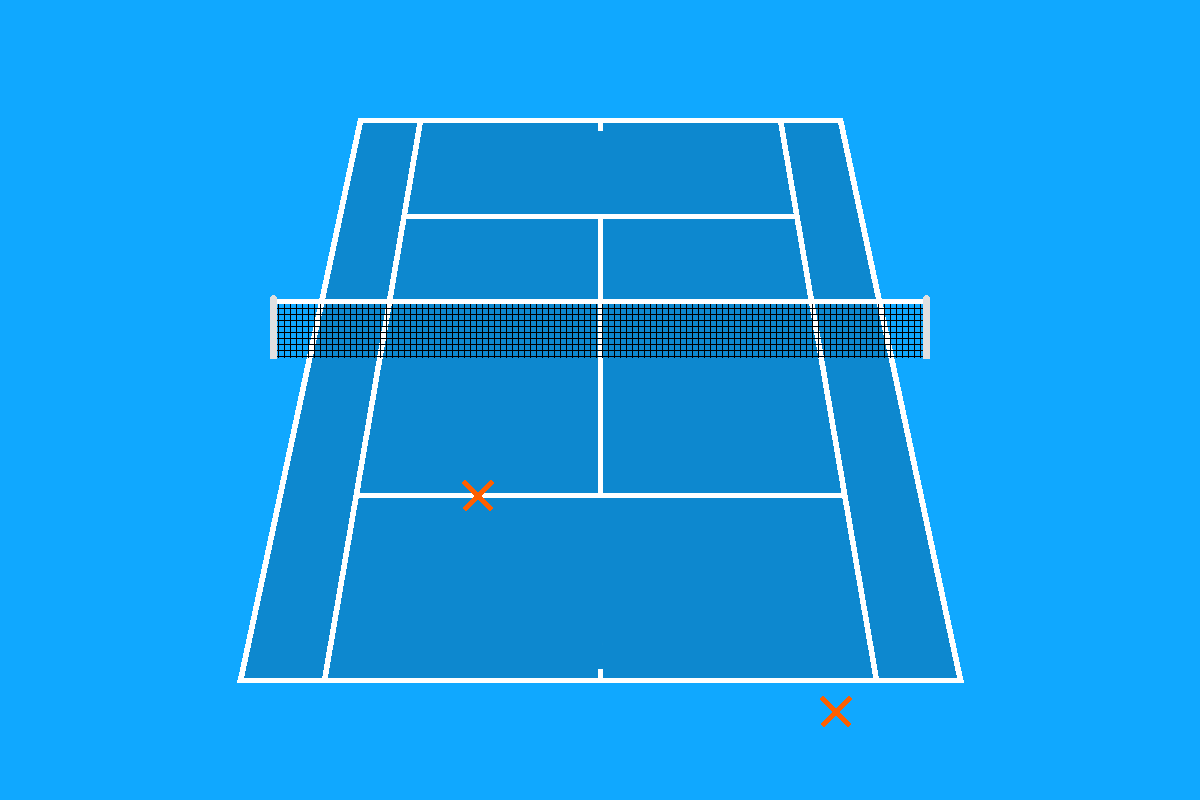 Since the service box for doubles has not been enlarged, the ready position for the returner is identical to singles. So if you return the ball, you are standing on the baseline near the inner sidelines.

Your partner moves towards the net again. He takes a defensive position on your opponent’s first serve and waits at the service line. In this moment, he watches only the net player on the opposing side.

On the second serve, your partner moves forward a bit to put more pressure on your opponent. When the serve comes into the court, you should primarily hit the ball cross court as the return player. The reason for this is that a longline shot is quite risky because the net player covers this area perfectly.

In doubles, good communication is the key to success. You should already think about tactics before the match. Talk to each other about your strengths and weaknesses to make it easier to decide which of you will play on the forehand or backhand side.

Unlike singles, you will spend more time at the net, so you should definitely practice volleys and smashes. Don’t forget to include half volleys in your training, as the ball is often played right in front of your feet

In general, in doubles, well-placed balls are more important than powerful shots. For example, at net you can better use the angles of the volley. If the opportunity arises, you should not stay at the baseline, but approach the net. If you are both at the baseline, it is best to run to the net at the same time.

As a net player, make sure that you keep moving during the entire rally and do not wait for the ball statically. Figuratively speaking, you move parallel to the net, as if you were on a rail. In order to be able to react as quickly as possible, you should also transfer your body weight to the forefoot and thus take the ready position. At the right moment, one of you will catch the ball with a volley.

As briefly mentioned above, volleys in front of your opponent’s feet are very effective, as he gets in his own way and has almost no time to react. Also try to anticipate your opponent’s movements so that you can estimate the direction of the ball. You should also look for not covered space on your opponent’s court and use it to your advantage.

Another tip is to play the ball down the center. It often happens that your opponents disagree about who is going to hit the ball and end up making a mistake.