Skip to content
How to Play Padel Tennis – The Complete Guide

How to Play Padel Tennis – The Complete Guide

What is currently the fastest growing sport in the world? – Right, it’s padel tennis. Nowadays this sport has more than 10 million active players worldwide. And new ones are added daily. Nevertheless, padel tennis is still in its infancy in many parts of the world and has a lot of potential to become a popular sport.

As the name suggests, this new trend sport has many parallels to tennis. Therefore, it is worthwhile for us tennis players to take a closer look at padel tennis. What makes this sport so special and how it differs from tennis, you will learn in this article. 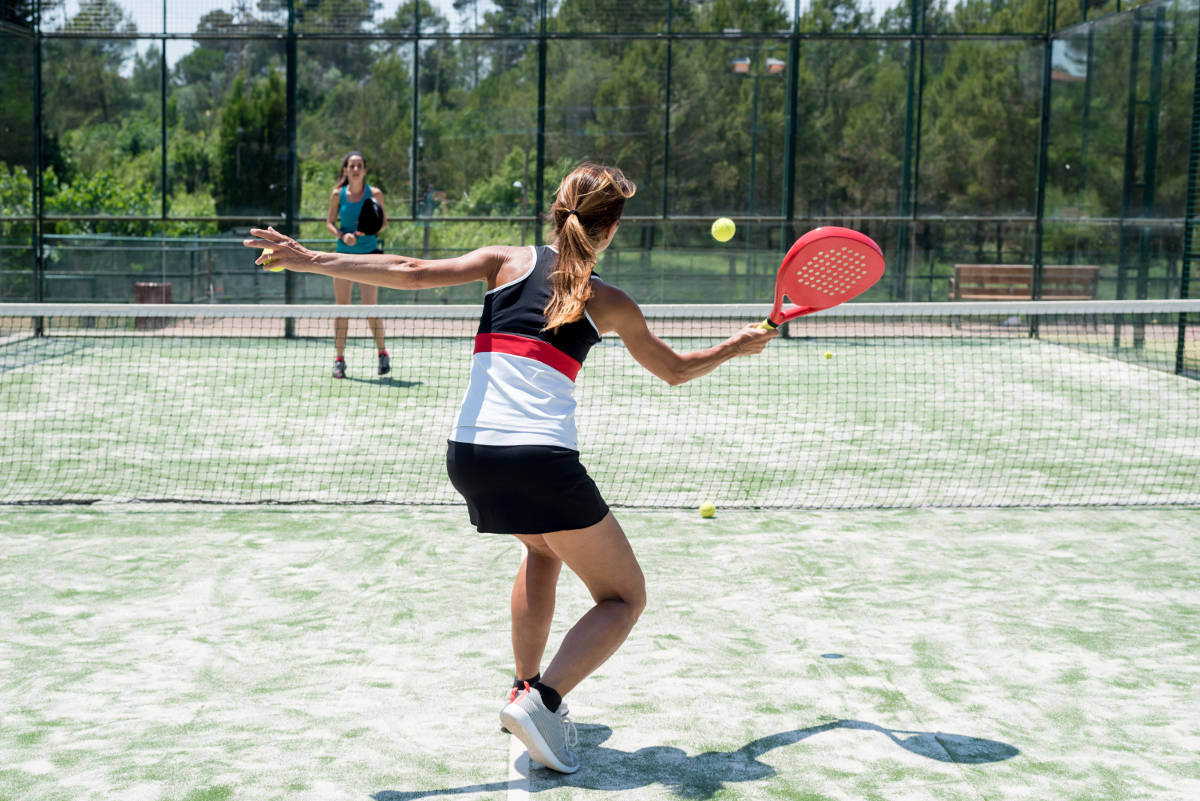 The beginnings of paddle tennis can be found in the Mexican city of Acapulco. In 1965, the Mexican tennis fan, Don Enrique Corcuera, fulfilled the wish of having his own tennis court on his property. However, because there was a lack of space, he reduced the size of the court himself.

In addition, the court was located directly on the wall of his house. To create the same playing conditions on both sides of the court, Corcuera built another wall on the opposite side. He then enclosed the court with a wire mesh fence. In this way, the typical padel tennis court was created.

In 1974, Corcuera invited his long-time Spanish friend, Alfonso Hohenlohe, and introduced him to the new game. Soon Hohenlohe was enthusiastic and
took the idea back to Spain. There he had several courts installed in his well-known hotel, the Marbella Club.

From this point on, the sport spread rapidly throughout Spain. Among other things, Hohenlohe organised various padel tournaments to which he invited celebrities. One of them was the Argentinean millionaire and businessman Julio Menditeguy, who was also fond of padel tennis.

When Menditeguy returned to Argentina, he began to build padel courts throughout the country. After a short time, the new sport became very popular among the population. As a result, interest in padel spread to neighboring countries, and the sport was soon seen throughout whole South America.

Due to its popularity, the first world championship of padel was held in 1992, which is now held every two years. Some time later, a pro tour was also created. According to this, since 2005 there has been an international series of padel tournaments for professional padel players.

Nowadays, padel tennis is a popular sport in Spain as well as in South America. Padel tennis is now spreading to other countries across the world.

In fact, padel and tennis seem very similar at first glance. Both sports combine that you hit a ball over the net with a racket. However, if you take a closer look at the equipment, you will notice some differences. More specifically, this is the case with the racket and the balls.

Basically the padel racket is made of graphite or carbon reinforced plastic. In contrast to tennis rackets, padel rackets don’t have any strings, but a solid racket head. It is equipped with holes so that you can swing the racket with less air resistance.

The inside of the racket face is made of a flexible foam, which increases ball acceleration and reduces vibrations when the ball comes into contact with the surface. For better durability, this core is covered with several layers of plastic or carbon fibre.

Another difference between tennis and padel rackets is their size. While tennis rackets have a standard length of 27 inches, padel rackets may only have a maximum length of 18 inches. In addition, their racket surface must not be wider than 10 inches.

The situation is slightly different for the beam width. Here a padel racket has a width or thickness of up to 38 mm. This is almost twice as much as with most tennis rackets. Accordingly, paddle rackets have a higher weight. Usually it is between 12 and 14 oz.

In addition, there is a loop at the end of the racket handle, which length should not exceed 13.8 inches. This safety loop prevents the padel racket from hitting your teammate or opponent if the racket should slip out of your hand.

Paddle rackets with a round shaped head are primarily designed for good control. A diamond shaped racket provides you with less control, but more power.

If you want to combine both features, then a paddle racket in teardrop shape is the right choice for you. As an all-round racket, it offers you a mixture of power and control.

Another similarity between tennis rackets and padel rackets can be seen in the balance point. Paddle rackets can also be head heavy, head light or even balanced.

Furthermore, grip size also plays an important role in padel rackets. On this page you can read about the influence of the different features on the game: Find the right racket 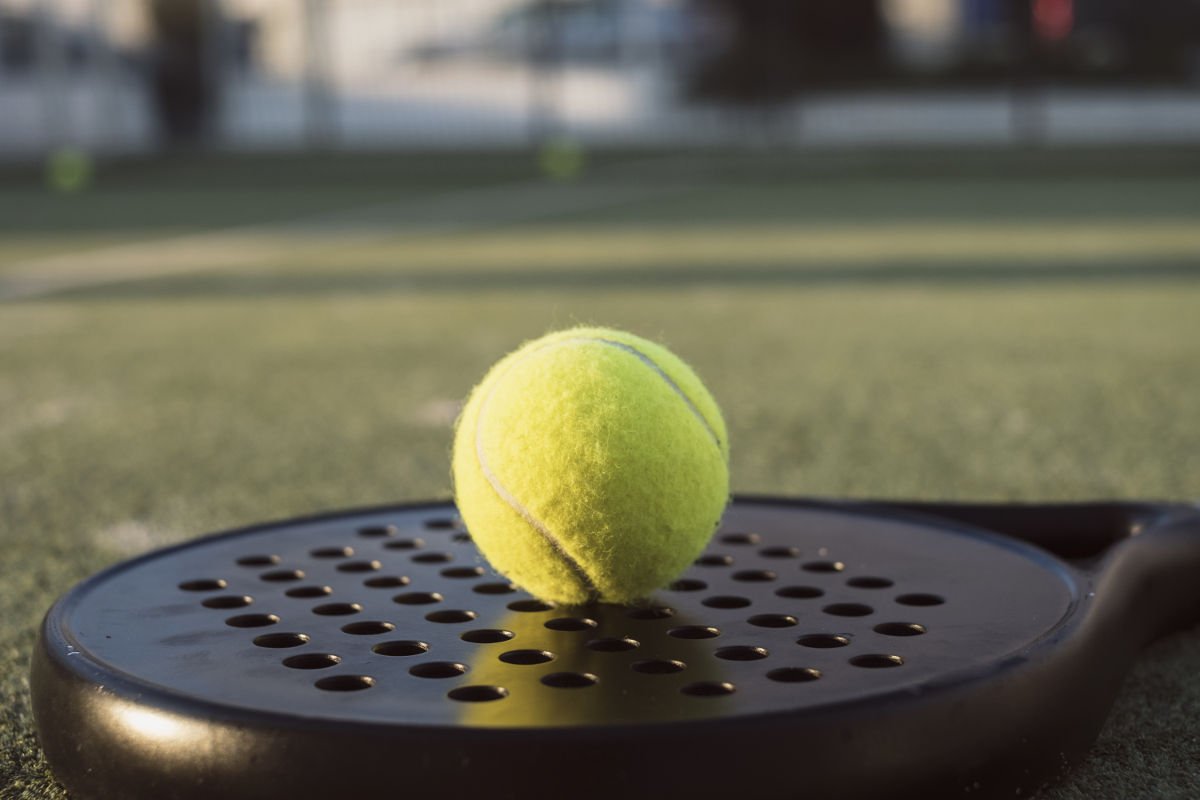 As a rule, padel balls have a yellow colour just like normal tennis balls. They are made of the same materials, a rubber core with a felt layer.

The first difference between the two types of balls is the diameter. The diameter of a padel ball can be in the range of 2.50 to 2.63 inches. Therefore the standard tennis ball with a diameter between 2.57 and 2.70 inches is slightly larger.

In addition, the padel ball has a much lower air pressure than the tennis ball. You can tell this from the fact that the padel ball bounces off a little flatter. In general, playing with this ball is a little slower, which gives you more time to react. At the same time, you have to use more power to hit the ball on the opponent’s side. 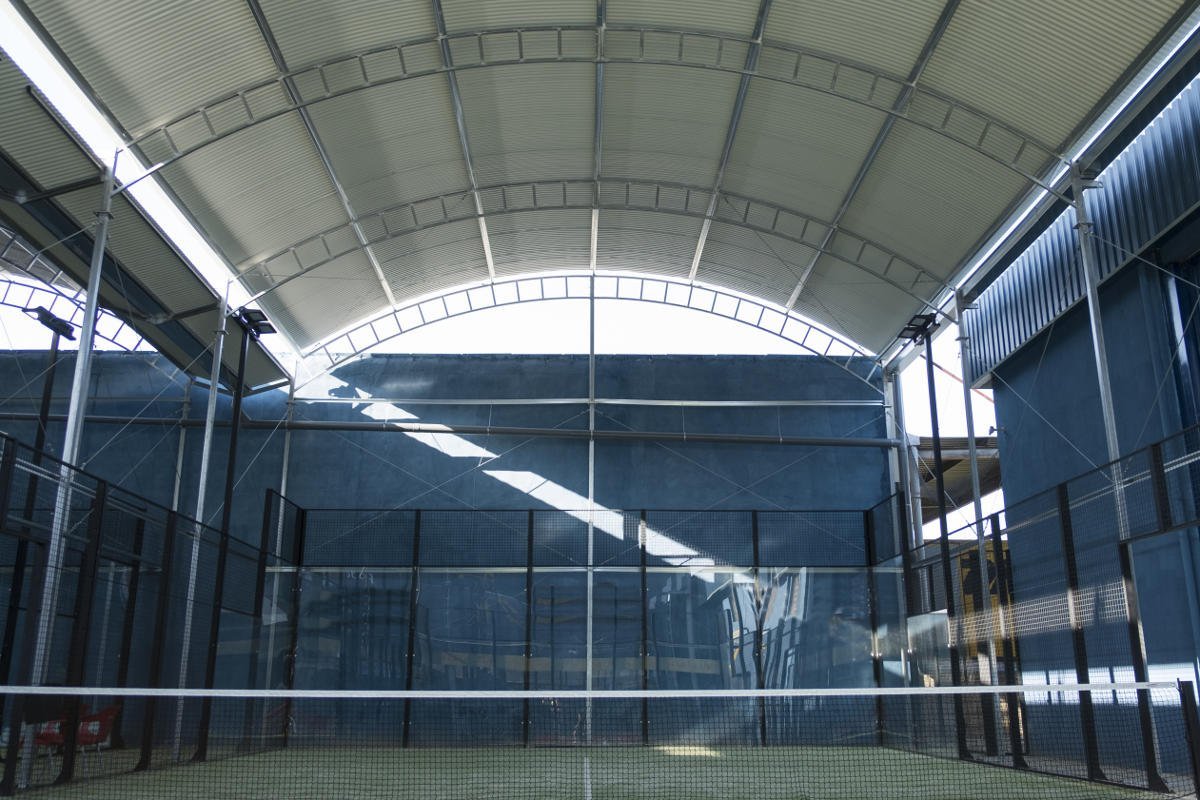 In terms of the court, there are the biggest differences between padel and tennis. While the tennis court is kept open and has some extra space, you play padel in a closed cage.

As in tennis, the padel court is divided in the middle by a net. This net is slightly lower in padel. More precisely, it’s height is 2.9 ft. in the middle and max. 3 ft. at the net posts.

There is also a service line on each side of the net, parallel to the net. The distance to the net is 22.8 ft. In addition, the centre service line divides the service box into two equally large areas. 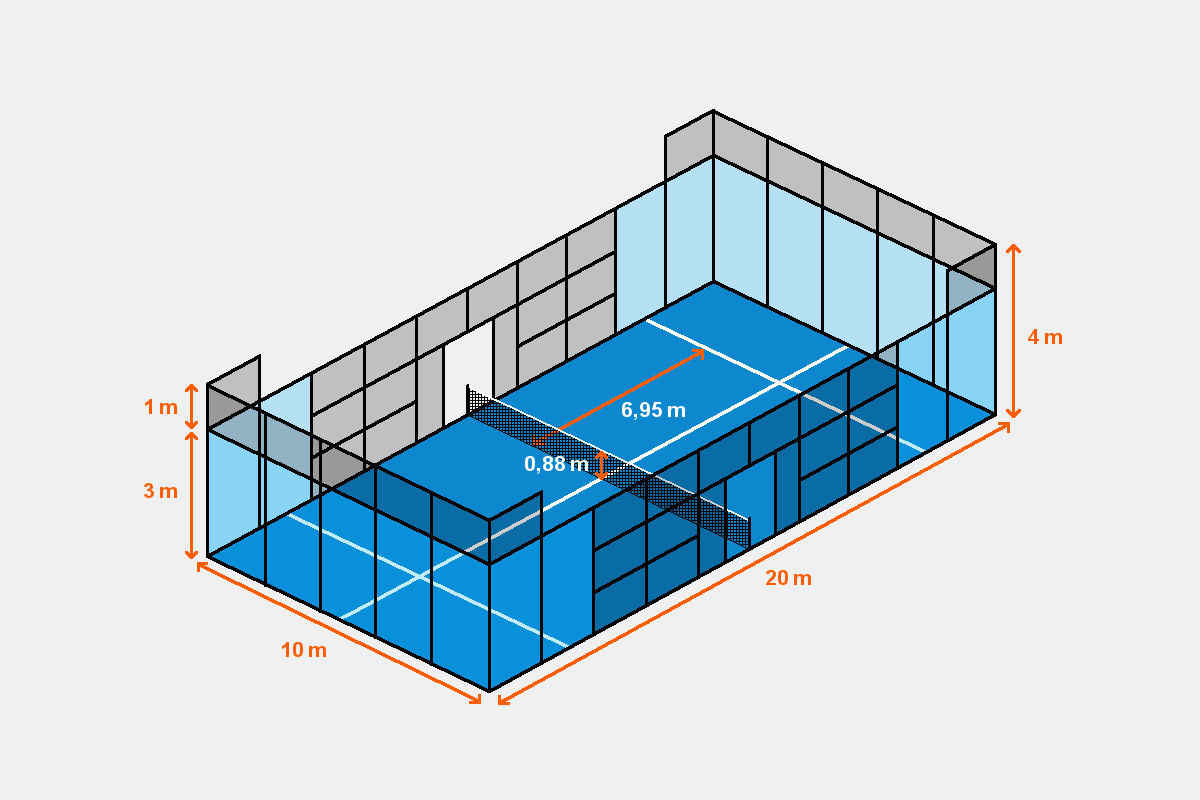 The court itself can have different surfaces. Artificial grass is often used, which is additionally sprinkled with sand or granulate. Padel courts with a concrete floor or a carpet surface are indoors also common.

As briefly mentioned above, the padel court is enclosed by a cage. Basically, this cage consists of two elements. First, there are two walls made of glass or concrete with a height of 9.8 ft. at the front sides. Additionally there is a 3.3 ft. high metal grid, which is mounted on the walls.

Very important is the access for the players in the middle of the long sides. Depending on the variant, doors can also be installed there. During the game, however, the passage must be open so that the players can run outside during the rallies.

Now let’s take a look at the rules of padel tennis. Usually you will only play doubles in this sport. Just as in tennis, all three variants are possible here, i.e. men’s doubles, women’s doubles or mixed doubles.

Basically you can imagine paddle tennis as a mixture of tennis and squash. This means that you can include the walls in the game.

As is well known, every rally starts with the serve. To do this, position yourself on the corresponding side behind the service line. Now you hit the ball diagonally into your opponents’ service box.

The swing path of the padel serve is very different from the tennis serve, because you have to serve from the underarm. Therefore, you must hit the padel ball at maximum hip height. So you drop the ball once on the ground and hit it in time onto the opposing side.

From now on, with a few exceptions, the same rules apply as in tennis. The first exception is that the ball must not touch the metal fence immediately after your serve. In this case the serve would be a fault.

Furthermore, in padel you don’t have an unlimited number of let serves. This is because you only have one more serve left after the let serve on the second attempt. 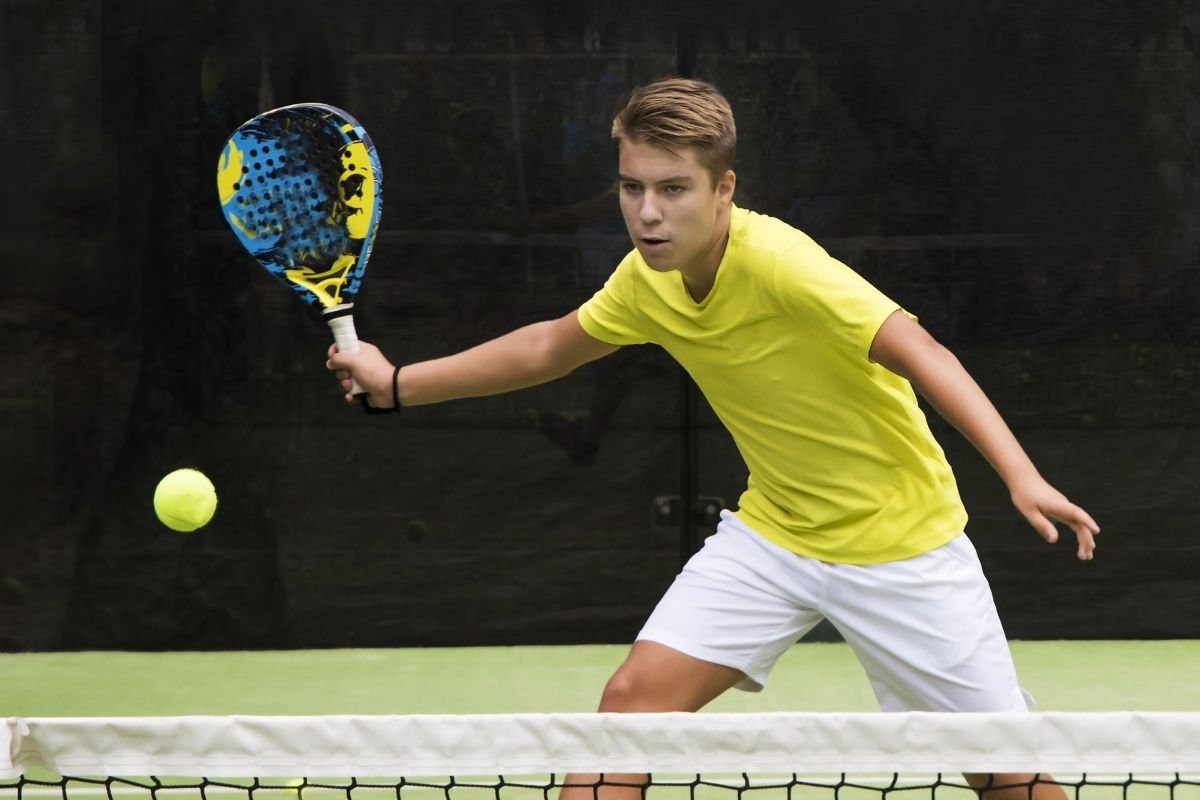 The special thing about padel is that you almost never hit the ball out of bounds, as the padel court is completely framed Although there is a theoretical possibility that you play the ball over the walls and it flies out of the cage, in practice this is hardly ever seen.

You can even use your own walls to deflect the ball. In padel this allows a completely new way of playing. Note, however, that you must not hit the ball directly against the fence, but only against the glass or concrete wall.

If you hit the wall or the fence of your opponents before the ball has bounced at least once on their ground, you will lose the point as well.

When a player from the opposing team hits a powerful smash, it often happens that the ball bounces off the floor and over the walls to the outside. You can still save the ball by running quickly out of the cage through the exit.

From there, you can try to get the ball back into the field, either through the door frames on the side or simply over the fence. This rule always creates spectacular rallies. 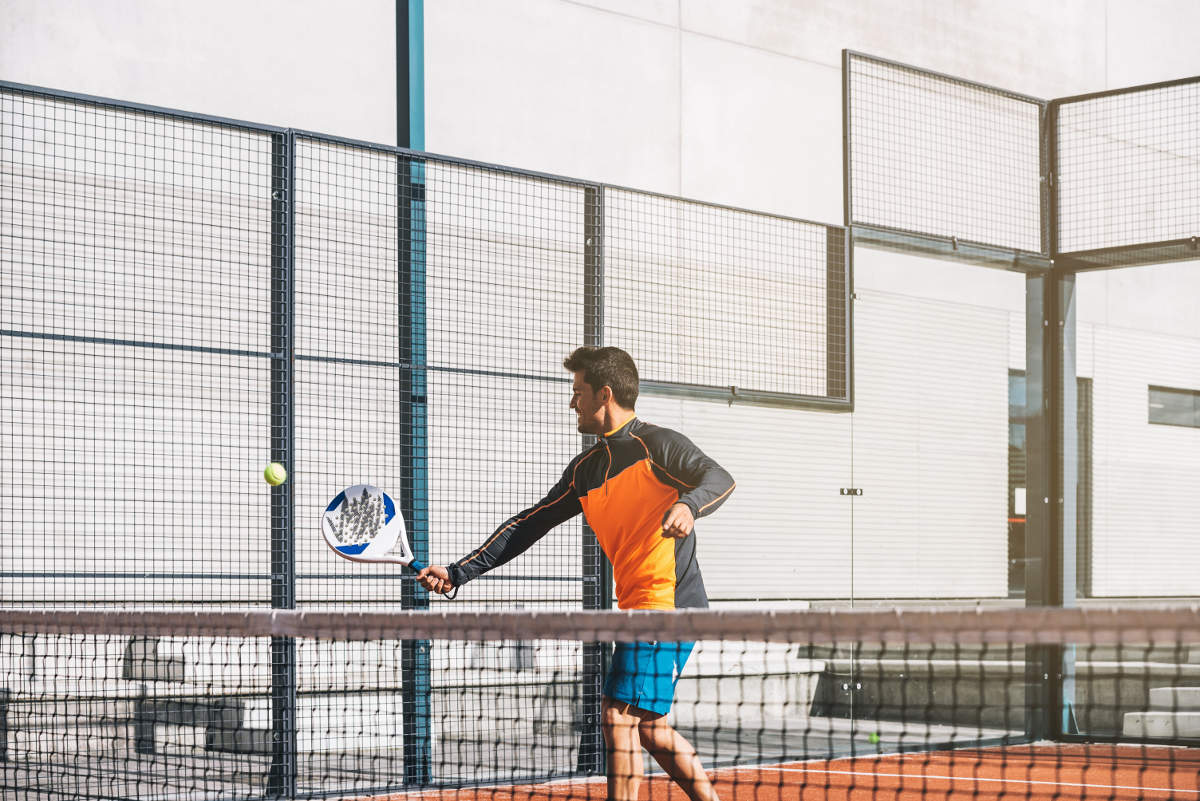 The technique also shows greater differences between padel and tennis. On the tennis court you hit your shots with a lot of topspin to push your opponent off the court. However, this is not possible in the padel cage, as the ball will bounce off the wall.

Here, you try to play the ball in such a way that it bounces on your opponent’s side more than once. The slice is better suited for this than topspin. You use it equally on the forehand and backhand side.

Furthermore, the backswing is much shorter, because the ball does not need that much speed. For the majority of strokes, the so-called continental grip is recommended. For us tennis players this grip position takes some getting used to at first, because we use a completely different grip for the forehand.

On average the rallies in padel are much longer than in tennis, which is why the shorter backswing has the additional advantage that it saves more energy.

Padel tennis is quite an interesting sport, especially when it comes to practicing one’s own reactions. You can also improve your coordination between your racket and tennis ball in a new way.

In summary, padel tennis offers tennis players a good addition to their existing training. This versatile sport is not popular for nothing.