Simple Steps to Get More Topspin on Your Groundstrokes

Topspin is one of the basic elements of today’s tennis game. If you look at successful tennis players, you will see that the majority of the forehands and backhands are played with the characteristic forward rotation.

One player who has perfected the topspin stroke is Rafael Nadal. With his topspin forehand, the Spaniard achieves a spin rate of up to 5,000 ball turns per minute.

Of course this is an absolute exception, there is no player who comes close to this number. Nevertheless you can see how important topspin has become in the meantime.

The Advantages of Shots with Topspin

Before we start with how you learn and improve topspin, let’s first look at why you should play mainly with topspin. Apart from the fact that professional players use it, topspin has many advantages.

First of all, you make it much harder for your opponent to return the ball to you. Since you give the ball a forward rotation, it bounces off much higher in the opponent’s court.

In this way, you push your opponent further behind the baseline. This creates new free space in his court, where you can place the next shot. He also has fewer opportunities to attack you in the rally.

Another advantage of the topspin shot is that you make fewer mistakes. I know you are probably thinking: “But there are a lot of mistakes when I try to play with topspin”. Well, these mistakes are mainly due to a wrong technique.

With the right technique you can actually reduce your error rate considerably. This is where the Magnus Effect comes into play.

Fewer Errors due to Magnus Effect

The Magnus Effect is a physical phenomenon which states that the tennis ball is deflected in one direction by its rotation in the air. The direction of the ball depends on the type of rotation. A ball with a topspin deflects downwards while a ball with a backspin (slice) stays longer in the air. 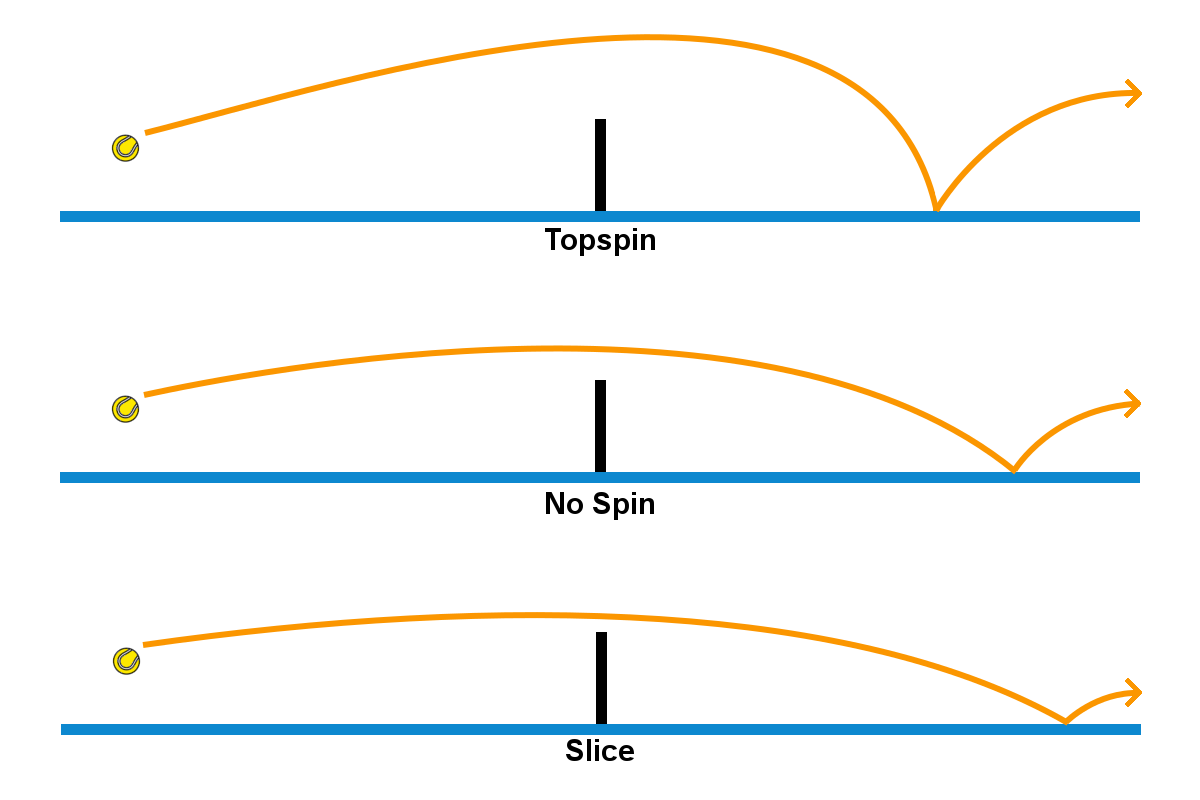 Compared to a normal shot, a ball with topspin therefore has a considerably steeper trajectory. The tennis ball turns into the court of your opponent, so to speak. As a result, fewer of your shots end up out of bounds.

In addition, you now have more margin for error over the net. You no longer have to play the ball so close over the net, but you can easily set it a little higher. This means that you hit fewer balls into the net.

How to Generate Topspin

Basically you can create topspin with both forehand and backhand. It is caused by the friction between the ball and the strings of the tennis racket. The amount of topspin depends mainly on the swing movement and the point where the ball hits the surface of the racket.

For example, if your racket face is parallel to the net and you only hit the ball in a straight movement, you won’t generate any topspin. To create as much topspin as possible, you have to wipe across the surface of the ball with the strings. 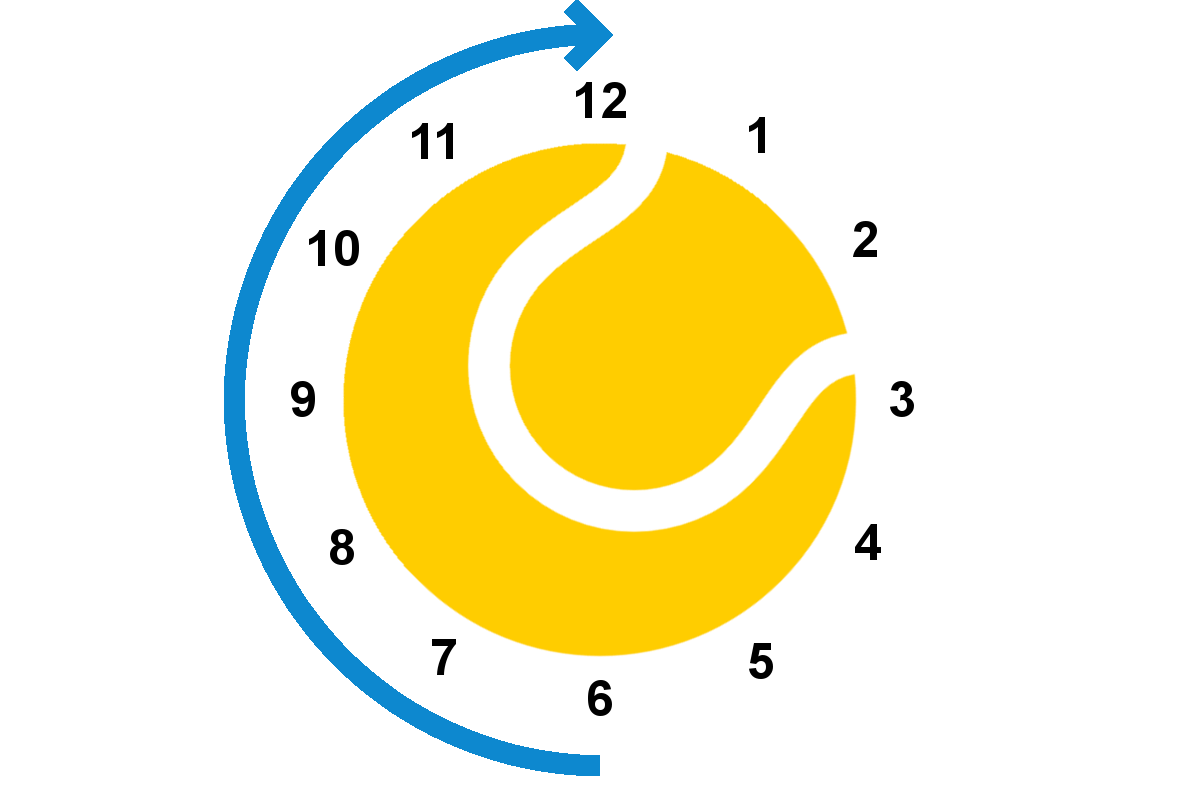 Figuratively you can imagine the ball as a clock. In this diagram, the ball comes towards you from the right, i.e. you stand with your racket on the left side. Now your task is to “cut” the ball with the racket from 6 to 12 o’clock.

You approach the ball from below and then swing your racket upwards in a slight upward movement so that the ball rotates forwards. Please make sure that you don’t hold the racket face too steep.

This would cause the ball to fly too short and land in the net. On the other hand, you should not hold the racket too flat, because the ball will rise up too much.

For example, if you have a lot of framing shots, this is often a sign that the ball is being hit too flat or too steeply. In this case, you should definitely keep an eye on your shot angle and correct it if necessary.

Generally there is a trick with which you can check if you have played a topspin forehand or topspin backhand correctly. To do this, listen to the sound of your racket when you hit the ball. If it sounds dull, you have hit the ball with little or no topspin. If the sound is higher, you can be sure that the ball had spin.

When you have gone through all the previous points and understood them, you are ready for the next step. We have three tips for you to improve your topspin shots even further.

A common assumption among tennis players is that topspin depends on the strength of the player. This is not quite true. Overall, the swing of your body is much more important when hitting the ball.

Basically, two parts of the body play an important role in topspin, your arm and your wrist. In order to get the most out of topspin, it is necessary that your muscles are loose. There is no point in hitting the hardest stroke in the world if you are tense.

Furthermore, loose muscles lead to a fluid swing movement, which allows you to hit the ball with more power and spin.

In general, the contact point with the greatest effect is where the ball has the longest contact with the strings of the tennis racket. So we look for the longest distance between the racket frame. This is located centrally on the stringbed, in the sweetspot area. Make sure you hit the ball in this area.

If you are a player who wants to get the maximum out of topspin, you could also adjust your equipment. For you, points such as the string pattern of the tennis racket as well as the material, diameter and tension of the strings are of interest.

How to Practice Topspin

After the technical basics comes, as is well known, the practice. Now go to the tennis court and practice the topspin shot on the forehand and backhand side. These three exercises are perfect for the beginners and can be done without a hitting partner or coach: