Skip to content
Review of the Babolat Play Tennis Sensor

Announced by Babolat as a revolution in tennis. This racket was to completely change the way tennis is trained. As a result, the rush was huge for many players.

The Babolat Play Pure Drive is the first smart tennis racquet to use a built-in sensor to track the player’s racket. This data is then analyzed, giving the player a picture of his or her strengths and weaknesses.

That sounds great at first glance. But does the racket really deliver what it promises? We have examined the Pure Drive very carefully and tested it extensively. You can find out how the test went here.

Basically the idea of smart sports equipment is not new. In other sports, sensor technology is widely used, for example in football. Tennis players, on the other hand, had to be patient a little longer. In the meantime, there are other manufacturers besides Babolat who offer this innovative technology.

Most of them are flexibly mountable sensors that can be easily removed again. With the Pure Drive this is a little different. Here the sensor is firmly installed in the handle and therefore not removable. The advantage is that the sensor doesn’t detach from the racket. In addition, it is protected from moisture.

The Babolat Play package includes the racquet, a racquet bag, a user manual, and a charging cable. As the name suggests, this “Play” version is based on the popular Babolat Pure Drive model. The features are identical on both racquets:

Only the design differs. Maybe you miss the unique and not to be confused blue of the basic version. Instead, the racket comes in a new black design with white lettering and orange color accents. 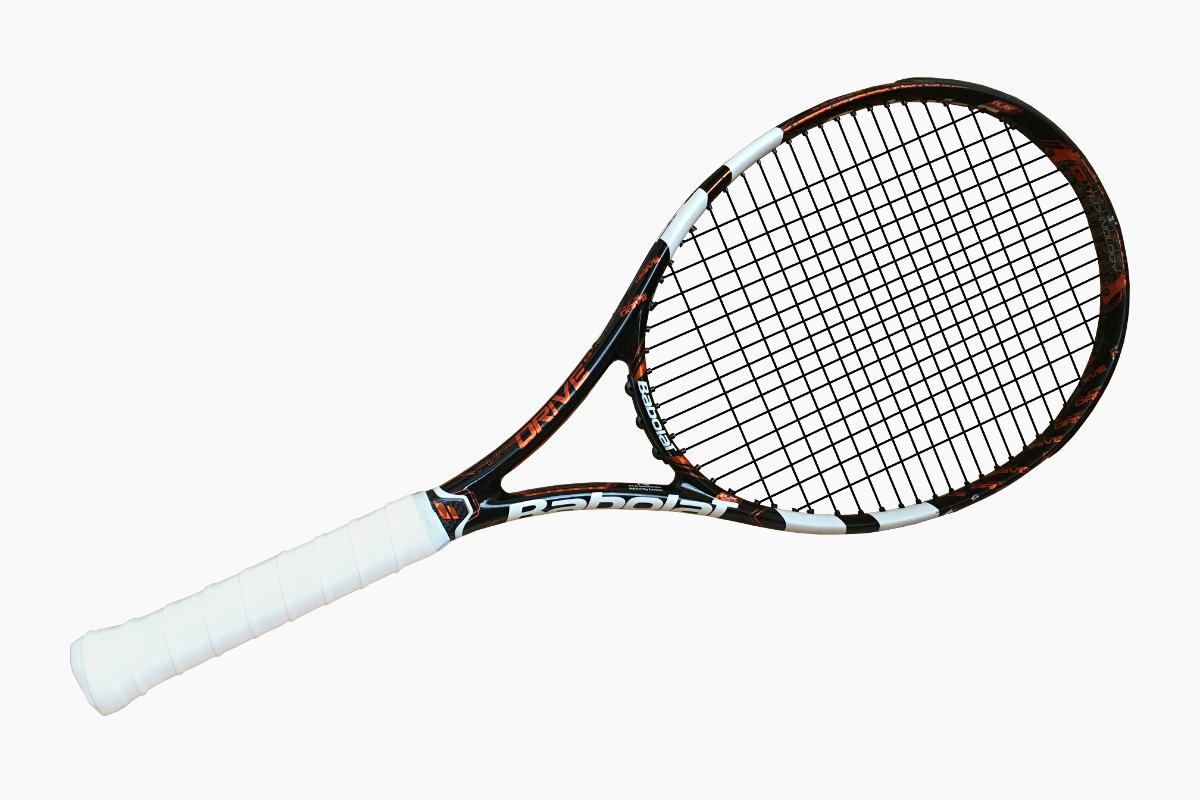 We were surprised that the Play racket has the same balance as the regular model, despite the sensor. Normally rackets with sensors are more head light. In this case, Babolat did a good job of integrating the sensor in a way that doesn’t change the feel of the classic Pure Drive.

As with the basic model, we were very impressed by the high acceleration of the ball. The large racquet head gives you enormous power in your groundstrokes. The open 16×19 string pattern also offers a high spin potential. All our testers loved the combination of power and spin.

Unfortunately control was somewhat left out with this racket. Of course the Pure Drive focuses on power and spin, but we would have liked a little more stability. This was especially the case with volleys at net. We also noticed that the groundstrokes were more distorted and ended up out of bounds. So you have to make some sacrifices in terms of feel and comfort.

Let us now turn to the interesting technology of the sensor. How does the racket work in detail?

Basically, the chip in the racket handle first collects information from every single shot you make on the tennis court. This data is then transmitted to the Babolat Play App via Bluetooth and analyzed. This app is available for devices with the iOS and Android operating systems.

After downloading the app, create an account and log in to the app. Now synchronize your racket with the app. First switch on the sensor on the grip cap. Then press and hold the second, larger button until a pink light turnes on. A few seconds later a message will appear on the display that the app is connected to your racket.

To start a training session, press the Bluetooth button again until a blue light starts flashing. This puts the racket in recording mode. Now you can start playing. It is important that the blue light flashes during the entire training session so that all shots are recorded. With a fully charged battery, the sensor lasts up to 6 hours. 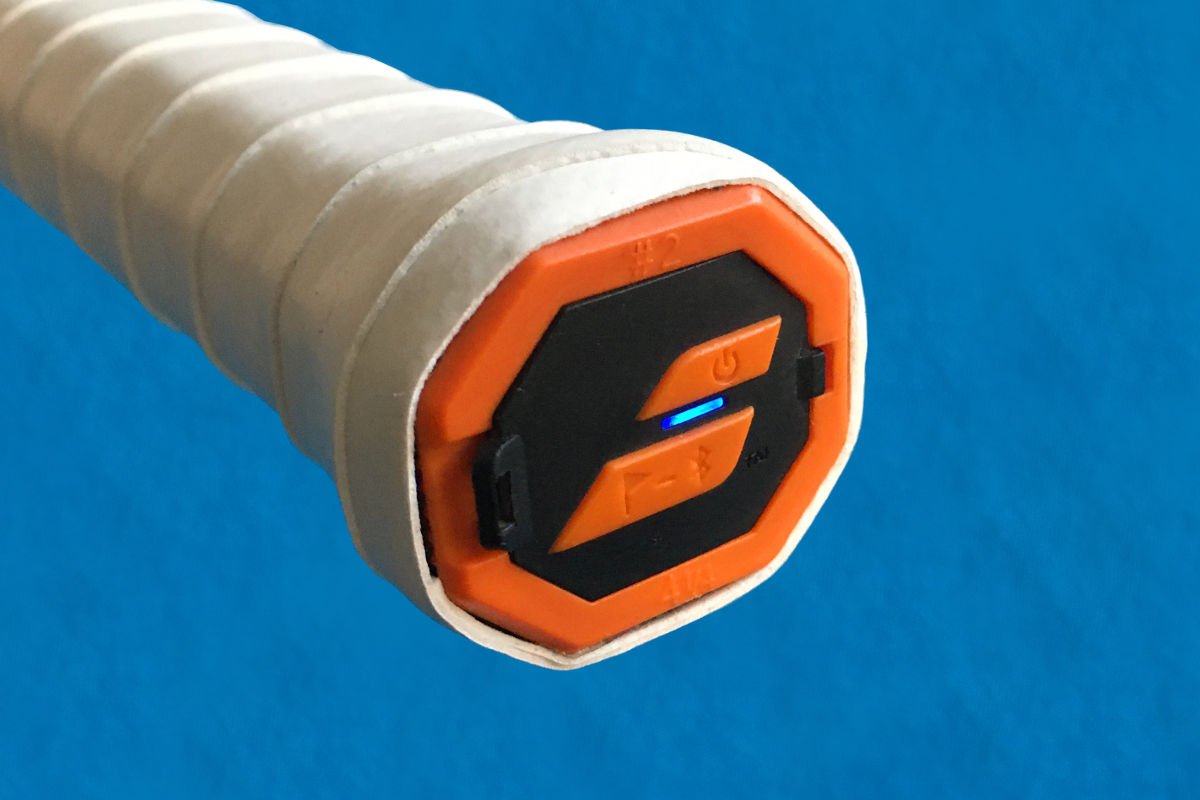 When you are done with training, open the app and create a new session. You can choose between a free session, the training session and the match mode. Afterwards, connect your racket to the app again. The data is now transferred via Bluetooth.

From a technical point of view, we found connecting the racket with our smartphone to be simple and unproblematic. The synchronization worked smoothly for all testers.

After the successful analysis of the data you will receive an overview with information about the number of strokes, intensity and playing time. We found it interesting that the actual playing time was only half as long as the total playing time. 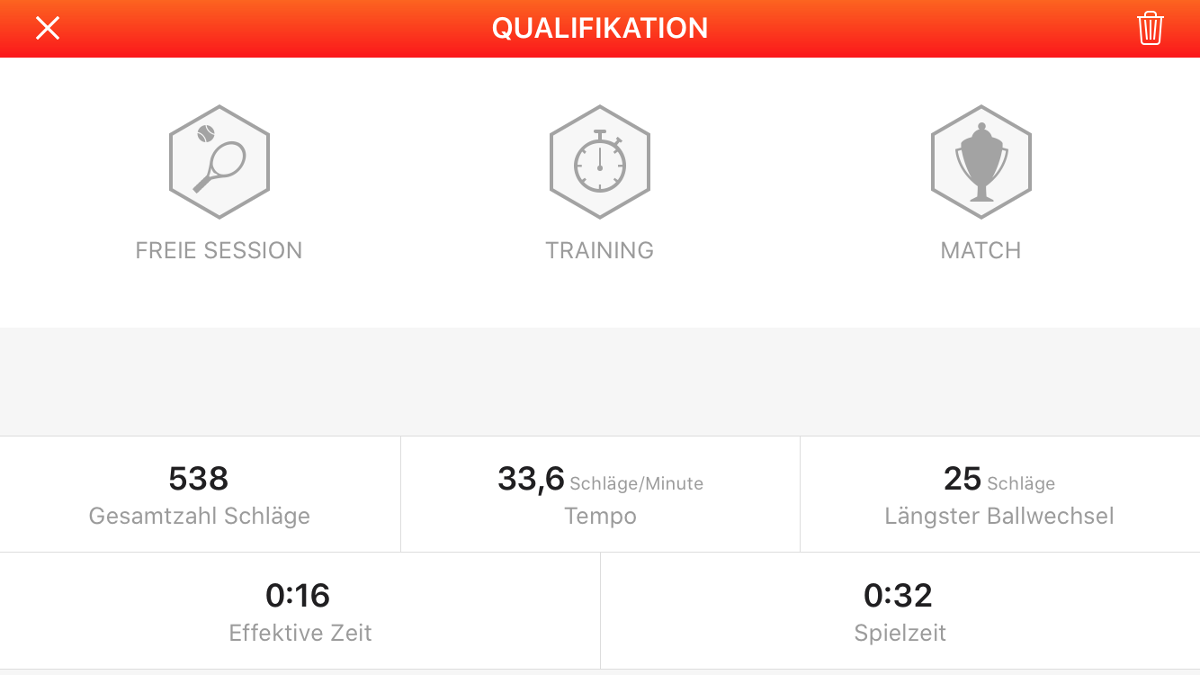 But that is by far not all. The app also offers you a lot of other useful statistics, such as shot analysis. The shots are divided into 5 categories:

In the graph you can display the number of measured shots in absolute numbers or as a percentage. In our test, the tennis racket recorded most of the strokes correctly. However, it must be said that volleys and smashes were not correctly detected. The sensor assigned these either to the forehands and backhands or to the serves. 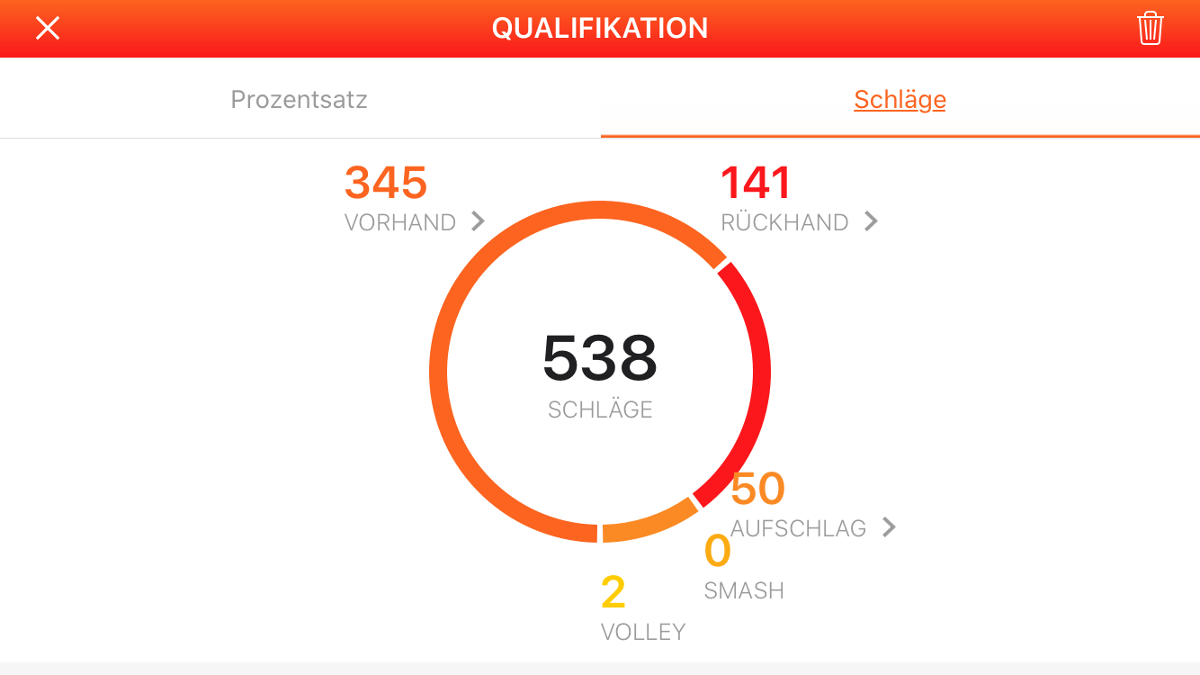 In addition to the previous functions, you have the possibility to evaluate your accuracy in detail. Here, the racket head is divided into 5 different areas. The sweetspot is located in the middle. In this way, you can see how many balls you have hit in a certain area. You can also filter this view by serve, forehand and backhand.

We think this is the best feature of the app. In tennis, one of the most important factors is to improve your accuracy. For an ideal shot you have to hit the ball in the sweetspot. Here you get direct feedback about the number of perfectly hit balls. 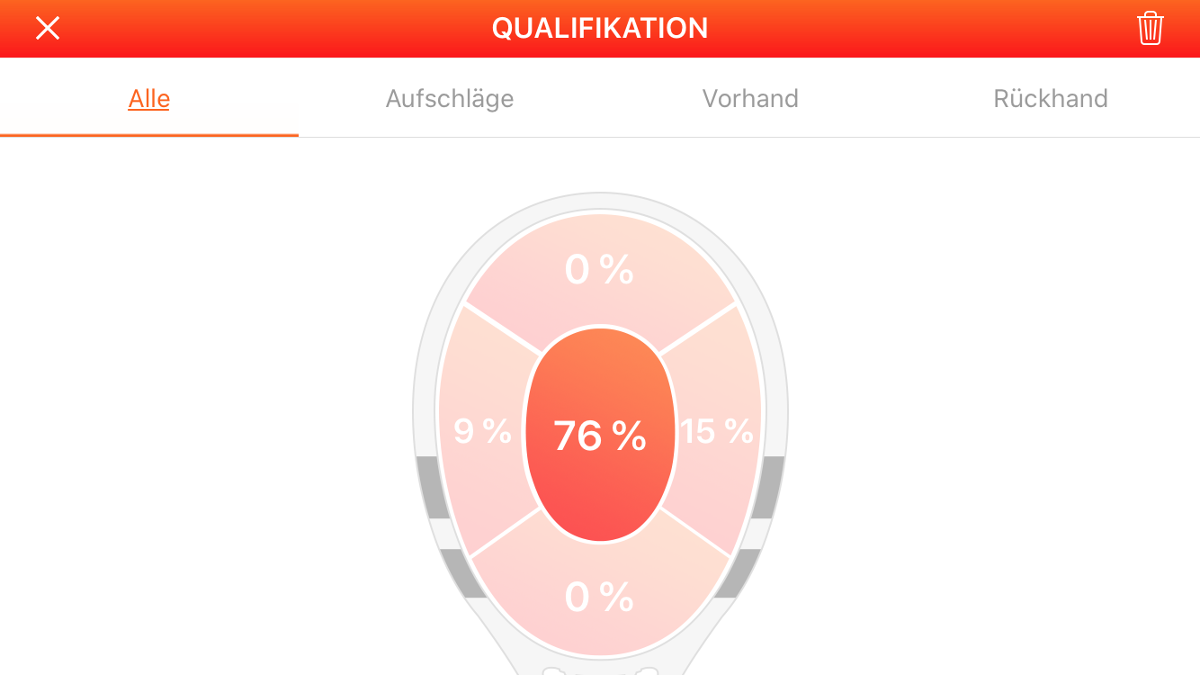 Another informative statistic shows you the spin of the balls you hit. The sensor also distinguishes between topspin, slice and balls without spin. You can look at the spin of your serve, your forehand and your backhand in detail. Tennis players who like to use a lot of spin will love this feature. 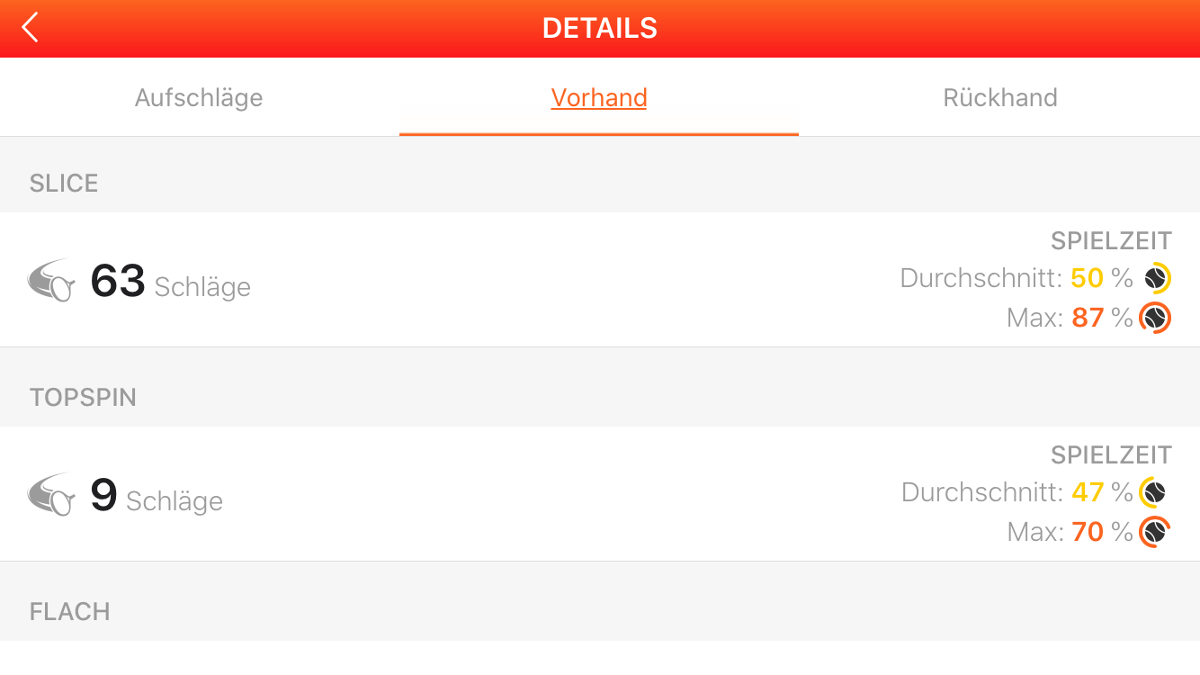 At the end of a session, the app summarizes all data and develops a user profile on this basis. Your progress is then displayed in a rating system.

In addition to match analysis, the app also includes a community where you can exchange information with other tennis players and measure your performance. You also have the possibility to create your own training plan.

Overall, we find the basic idea of making tennis digital very interesting. The Pure Drive Sensor tennis racket, in combination with the Babolat Play App, is a helpful gadget to improve your own tennis game.

The app scores with its easy handling and intuitive user interface. You get useful statistics to see which strokes you still need to train on.

In our test the sensor showed some inaccuracies, but this was mainly the case when measuring volleys and smashes. From our point of view, the Play Pure Drive is still a good choice for ambitious tennis players who want to get extensive information about their game in order to improve their technique.